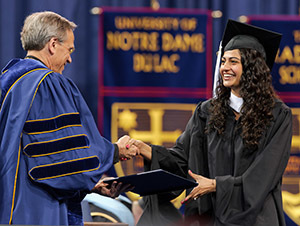 Hatch focused on the themes of curiosity and grit in his remarks.

“This morning I want to leave you with two simple messages, the first about intellectual curiosity and the importance of learning as an end in itself; the second, about what scholars are now calling ‘grit’ or resilience,” he said.

Hatch explained that there were two reasons for his emphasis on intellectual curiosity.

“First, it is crucial for the vitality of your own sense of calling long-term,” he said. “Whether you will be spending time teaching, or in research, in public service, or in management, keeping alive a flame of curiosity will give motivation and meaning to what you do. Thomas Jefferson once said that the best prize life offers is the chance to work hard at work worth doing. Your work will continue to seem worth doing if it is animated by sustained inquiry.”

Hatch noted that he was also emphasizing intellectual curiosity because the ideal of learning for its own sake is under steady assault amid demands that the primary purpose of higher education should be its economic utility. 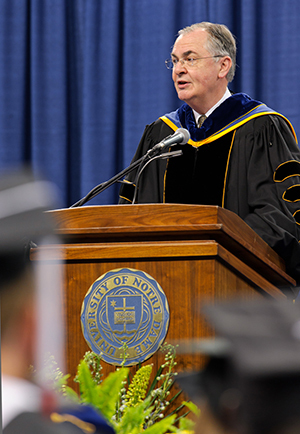 “This kind of accountability may have its place, but it also brings into question the value of learning itself and the vital importance of a liberal arts education — in a time when in Andrew Delbanco’s eloquent rendering, the liberal arts are becoming marginal or merely ornamental.

“All of us need to redouble our efforts to defend the ‘higher’ purposes of a college education despite our economic woes, just as C.S. Lewis did in his address during World War II, ‘Learning in Wartime:’ In that address he defended the importance of the life of the mind even when civilization was literally crumbling.”

Hatch explained that “grit” is important for two reasons. The first is related to the fact that today’s generation of students tends to have many and varied interests.

“My advice to you, as young professionals, is to become really good at something,” he said. “It is better to master one discrete thing than dabble in ten interesting projects. Being the faithful steward of a small responsibility will convince others you can be entrusted with larger things.”

Hatch noted that grit is important for another reason.

“Your generation needs to cultivate a second quality of ‘grit:’ to understand how to cope with disappointment and failure,” he said. “The timeless, if uncomfortable, truth is that true strength of character is almost always forged by encountering and overcoming failure.”

In conclusion, Hatch said, “This morning, I extend the heartiest congratulations on this special day. And I commend to you the conjoined virtues of relentless curiosity and sustained focus and hard work.”