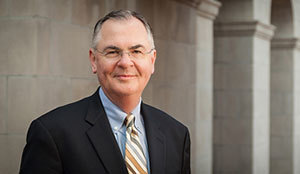 Nathan O. Hatch, president of Wake Forest University and formerly provost and the Andrew V. Tackes Professor of History at the University of Notre Dame, will be the principal speaker at the commencement ceremony for the Notre Dame Graduate School on May 18 (Saturday). Degrees will be bestowed on doctoral and master’s students in more than 30 programs of study during the ceremony.

The ceremony will take place at 10 a.m. at the Compton Family Ice Arena.

Hatch is regularly cited as one of the most influential scholars in the study of the history of religion in America. He received national acclaim for his 1989 book, “The Democratization of American Christianity,” in which he examines how the rise of religious groups in the early 19th century helped shape American culture and foster democracy. The book was chosen in a survey of 2,000 historians and sociologists as one of the two most important books in the study of American religion. He is also the author or editor of seven additional books on American history.

Hatch became Wake Forest’s 13th president on July 1, 2005. As president, he oversees the undergraduate college, the graduate school, and schools of business, divinity, law and medicine.

In his seven years as Wake Forest’s leader, Hatch has worked to clarify that university’s mission and strategic plan, assemble a distinguished and cohesive team of leaders, and make significant realignments in business and medicine. He has also undertaken an initiative to make standardized tests optional for undergraduate applicants and, throughout the university, worked to develop new programs to educate the whole person.

Hatch is an active leader in American higher education and in local and community affairs, both in South Bend and Winston-Salem, N.C. He served on the board of the American Council on Education and is currently chair of the Division I Board of Directors of the NCAA. He is the immediate past chair of the board of directors of the National Association of Independent Colleges and Universities.