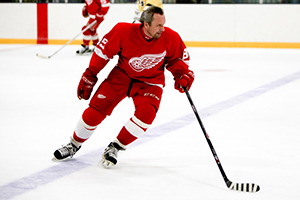 On Dec. 10­-11, the Nanovic Institute for European Studies at the University of Notre Dame will present “Elite Athletes and the Cold War,” a series of events that will bring former NHL players to campus to explore how professional athletes from the former Soviet bloc experienced the political contest of the Cold War.

Current tensions between the United States and Russia have raised questions about whether a new cold war is underway. To understand current differences between Washington, D.C., and Moscow, it is essential to examine the tensions that existed between the U.S. and the Soviet Union for more than four decades from the late 1940s until the fall of communism in 1989. The Nanovic Institute has organized a series of events to examine the Cold War period through the eyes of former elite hockey players who navigated the conflict between East and West.

The events will begin on Thursday (Dec. 10) with a screening of “Red Army” (2014), the acclaimed documentary film by Gabe Polsky, who follows the lives of players and coaches from one the most successful dynasties in the history of international sport. Polsky will be present at the screening in the Browning Cinema to introduce his film at 7 p.m. and to answer questions from the audience afterward. The screening will be open to the public. For ticket information, visit performingarts.nd.edu or call 574­-631­-2800.

On Friday (Dec. 11), the institute will host a panel discussion with Polsky and four world­-class hockey players who moved from East to West and went on to have lengthy professional careers in the NHL: Petr Klíma, Alexei Kovalev, Michal Pivoňka and Peter Šťastný. The panelists will address what it was like to grow up and compete athletically in the Soviet bloc and recount their stories about how they came to the West to pursue professional hockey careers.

The panel will be hosted by A. James McAdams, director of the Nanovic Institute and William M. Scholl Professor of International Affairs. The panel will be moderated by Thomas J. Heiden, a 1967 graduate of Notre Dame, former hockey player and coach, member of Notre Dame’s Advisory Council for the College of Arts and Letters and a partner at Latham & Watkins LLP in Chicago.

The panel discussion will take place in McKenna Hall Auditorium at 2 p.m. and is free and open to the public.

These events have been organized in partnership with Notre Dame Athletics and the DeBartolo Performing Arts Center.