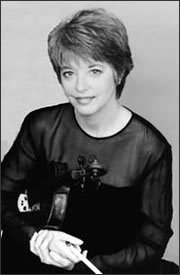 Carolyn Plummer is a musician and associate professor of violin by trade. But when she fiddles around on her free time, she loves investing.

“Its the most complex world Ive ever seen, and Ive been lucky,” she says. "Im not a guru. I read a lot of books and try to learn from the great minds in the business. I just try to look at big pictures and buy quality companies that show accelerating quarterly earnings growth.

Plummer is receiving unusual attention of late as a participant in the Barrons Challenge, a 2 ½-month investing contest for college students and professors organized by the weekly investment magazine.

Midway through the competition, the Barrons staff informed Plummer that she was among the top contenders. Her twin, Kathryn, a viola professor at Vanderbilt University, joined the contest on Carolyns advice as a means of introducing Kathryns 16-year-old son to investment markets. The contest challenge ended this week and Plummer said she expects to learn the final results by the first of the year.

Plummers return rate of around 10 percent halfway through the challenge was far from the nearly 40 percent returns registered by the leading competitors. A touch of conservatism informed her steady run with the theoretical $100,000 that the challenge allowed her.

“I decided I would approach the contest as I would with my own money – my real money,” she said.

For example, she sidestepped investing in Google, whose recent foray into public trading was highly controversial.

As long as everyone understands that she is not an expert at investing, Plummer will share her secrets. She does her homework on everything she buys, making good use of numerous free resources, including Yahoo! Finance. If shes making short-term trades, instead of holding something for the long run, she consults a professional, real-time data source. She assumes a corporations financial reports are unreasonably rosy. She learns from her mistakes, the most costly which occurred during the dot.com bust. She knows that an awful lot of what she gains involves luck, and sometimes her decision comes down to following a hunch.

Plummer became her own investment analyst and broker after a foray into the stock market during her 20s. She worked with a major brokerage house and just didnt feel it was working in her best interest. Raised by a mother who had run the family finances, Plummer says she felt capable of managing her money and confident a woman would be wise to do so.

Plummer is not comfortable dispensing investing advice, but she has a few observations on personal finance from her viewpoint as a musician. “We dont make astronomical salaries. Its important for people in the arts to put as much in an investment account as they possibly can.” As she has said to her twin: If theres a work-place retirement account, put in as much as possible.

When she has the chance, Plummer will address investing with her students because she knows how sparse personal finance education is in a performance education.

She points out the similarities of music and the market. “Theres fear in investing,” she said. “And theres a lot of fear in music. And just as you dont want your musical career judged by the quality of one performance, so the success of your portfolio will not be settled by one trade.”

And then she encourages her students to start investing immediately, if only a little.

“If they just take a little bit every month, they could be set for life because of compound interest,” she said. "This, with dividend reinvestment, can really add up.