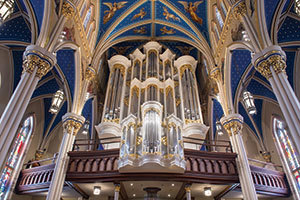 Twelve years of planning and artisanship came to a glorious conclusion Friday, Jan. 20, when Craig Cramer performed “Le Mystère de Noël” by Auguste Fauchard on the Basilica of the Sacred Heart’s majestic new pipe organ. “It’s what people have been waiting for,” says Andrew McShane, director of music at the Basilica, of the concert.

The Wayne and Diana Murdy Family Organ has been ensconced in its new home at the Basilica since October and played twice a day since then. The dedication ceremony marked the project’s official completion.

John Rosenthal and Patti Olive, members of the congregation, are among those celebrating. “My musical experience has just been listening and singing in the choir,” says Patti Olive, “but to me, the new organ’s clarity of sound is really phenomenal.” She and her husband, Dave, have attended Mass at the Basilica for nine years. She also serves as a tour guide for the church and coordinates its 11:30 a.m. daily Mass. On Sundays, both she and her husband help at Mass. John Rosenthal grew up attending Mass at the Basilica. He and his wife, Mary, were married there, and all three of their children were baptized there. The couple remain part of a close-knit group of regular attendees and are among several who, he says, “absolutely love music.” The rich sounds produced by the vast number of pipes in the new organ fills the Basilica as never before and enthralls them. “We are a church of symbols,” he notes, from its stained glass windows to paintings and statuary. The new organ now takes center stage, supporting worshippers’ voices raised to God.

The instrument was constructed by Paul Fritts & Company Organ Builders of Tacoma, Washington, the same master craftsmen who built the two-manual, 35-stop organ installed in 2004 in the Reyes Organ and Choral Hall at the new DeBartolo Performing Arts Center. Cramer, a professor of organ, served on the committee that selected the firm. When that 13-year project was done, Cramer’s late wife, Gail Walton, then the Basilica’s director of music, stepped forward to spearhead the drive for a new organ for the church. The Rev. Peter Rocca, C.S.C., the Basilica’s rector and himself a trained organist, deserves a lot of credit for moving the work ahead, says Cramer.

The grand four-manual, 70-stop soaring piece Fritts crafted for the Basilica features 5,164 gleaming pipes and gorgeous casework in the Dutch baroque style. Everyone on campus, and members of the greater community, should visit the Basilica to take it in, encourages McShane. “It’s not playing all of the time,” he says, “but if you can go hear it, hear it. If not, go see it. It is not only beautiful to listen to, it’s beautiful to see.”

The new instrument is Sacred Heart’s fifth organ since the 1850s. To accommodate it, the Basilica closed after “Silent Night” at the Dec. 28, 2015, Mass, so that workers could begin removing the old instrument, built by the Holtkamp Organ Company of Cleveland, Ohio, and installed in 1978. The Holtkamp’s 2,929 pipes have been donated to the new St. Pius X Church under construction in Granger. Concrete and steel reinforcement down to the Basilica’s foundation was required to accommodate what amounts to four stories of musical components that arrived last July 31. After the new instrument was reassembled and initially tuned, its music debuted during the annual Blue Mass honoring police, firefighters and emergency medical personnel, on Oct. 6.

The Murdy Family Organ, says Father Rocca, “is a wonderful addition to the Basilica.” One of the finest modern, historically informed organs in the world, he says, it will inspire the community, attract world-class performers to campus, and support the University’s Sacred Music Program by providing greater opportunity for students to learn and to develop their skills.

Adds Cramer, “The organ has such a vast literature, going back hundreds of years. No one organ can do justice to it.” DeBartolo’s Fritts organ, which was designed primarily for 17th- and 18th-century pieces, he says, complemented now by the Basilica’s instrument primarily for 19th-century music forward, makes a much broader swath of performance possible.” Cramer contends the Fritts organs at the Basilica and DeBartolo are the best two teachers the University’s organ students will ever have. He echoes, however, Father Rocca and McShane in saying that the primary role of an organ is to accompany the liturgy. Listeners of the rich sound can get pulled into its orbit and be inspired to engage more fully, he says.

Benjamin Stone, a second-year doctor of musical art student in organ performance, with undergraduate and master’s degrees from Notre Dame, has both played the new instrument and listened to it from the Basilica pews. Stone notes that as a student and someone who is not currently involved with Basilica music ministry, he was glad to hear McShane, during the installation, say, “The organ is for all of us.” McShane, he notes, sees the new organ “as enriching the life of the whole Notre Dame community.”

Staff, faculty, students and members of the greater community are invited to hear the organ performed at daily Masses celebrated at 11:30 a.m. and 5:15 p.m. during the academic year.