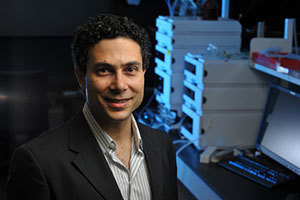 Researchers from the University of Notre Dame have engineered nanoparticles that show great promise for the treatment of multiple myeloma (MM), an incurable cancer of the plasma cells in bone marrow.

One of the difficulties doctors face in treating MM comes from the fact that cancer cells of this type start to develop resistance to the leading chemotherapeutic treatment, doxorubicin, when they adhere to tissue in bone marrow.

“The nanoparticles we have designed accomplish many things at once,” says Başar Bilgiçer, assistant professor of chemical and biomolecular engineering and chemistry and biochemistry, and an investigator in Notre Dame’s Advanced Diagnostics and Therapeutics (AD&T) initiative.

“First, they reduce the development of resistance to doxorubicin. Second, they actually get the cancer cells to actively consume the drug-loaded nanoparticles. Third, they reduce the toxic effect the drug has on healthy organs.”

The nanoparticles are coated with a special peptide that targets a specific receptor on the outside of multiple myeloma cells. These receptors cause the cells to adhere to bone marrow tissue and turn on the drug resistance mechanisms. But through the use of the newly developed peptide, the nanoparticles are able to bind to the receptors instead and prevent the cancer cells from adhering to the bone marrow in the first place.

The particles also carry the chemotherapeutic drug with them. When a particle attaches itself to an MM cell, the cell rapidly takes up the nanoparticle, and only then is the drug released, causing the DNA of cancer cell to break apart and the cell to die.

“Our research on mice shows that the nanoparticle formulation reduces the toxic effect doxorubicin has on other tissues, such as the kidneys and liver,” adds Tanyel Kiziltepe, a research assistant professor with the Department of Chemical and Biomolecular Engineering and AD&T.

“We believe further research will show that the heart is less affected as well. This could greatly reduce the harmful side-effects of this chemotherapy.”

The group had to tackle three important problems associated with all nanoparticle-based therapies, explains Jonathan Ashley, one of the leading researchers of the project.

“There was some complex bioengineering involved in developing the particles. We were able to precisely control the number of drug and targeting elements on each nanoparticle, achieve homogeneous nanoparticle size distribution and eliminate the batch-to-batch variability in particle production.”

Before advancing to human clinical trials, the team plans further research and testing to improve the design of the nanoparticles and to find the optimum amount and combination of chemotherapy drugs for this new treatment.

The research is described in greater detail in a recent edition of Nature’s Blood Cancer Journal. It was supported by funding from the Indiana Clinical and Translational Sciences Institute.