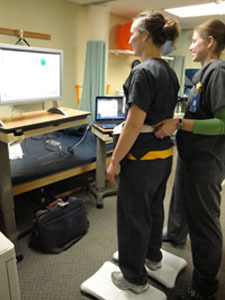 Those who have succumbed to the Wii craze are no doubt awed by its dizzying array of games and virtual sports. However, an innovative course offered in the University of Notre Dame’s Department of Computer Science and Engineering is encouraging students to take the innovative technology in new directions, including some that that fit nicely with the College of Engineering ’s emphasis on engineering for the greater good.

Aaron Striegel, an associate professor in the department, came up with the concept of offering its majors the opportunity to take a programming course that challenged them to design and develop new applications for the Wii.

Striegel notes that students enrolled in the course initially concentrated on creating new software for games, a natural inclination for a generation for whom gaming is second nature.

Eventually, however, a group of his students and colleagues hit upon an idea for a course project that has the potential to offer exciting therapeutic possibilities for stroke victims. 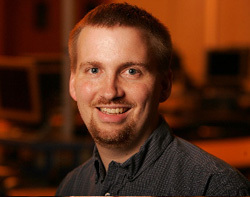 The question asked was, “Can we leverage the low-cost nature of the Wii Balance Board with custom software to deliver a better, objective balance rehab for victims of stroke?

Someone in America has a stroke every 45 seconds. Roughly 700,000 Americans will have a new or recurrent stroke this year and 163,000 will die. The economic impact of strokes is estimated at 40 to 70 million dollars per year.

For those who survive a stroke, a key step in returning to a sense of normalcy and independence is to regain a sense of balance through rehabilitation. However, regaining a sense of balance in health care settings using sophisticated rehab equipment is both costly and time consuming. Faced with this challenge, Striegel assigned a project to the course to undertake an effort to develop software that would take advantage of the lower cost Wii components to develop a diagnostic tool to help therapists to measure the progress of stroke victims in regaining balance. 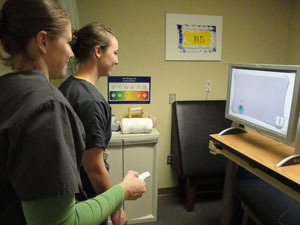 “Each student group was tasked with creating visualization for balance on a large, flat panel display,” Striegel said. “Students in the class created tremendously clever renderings of balance ranging from an airplane landing display to a game involving a penguin escaping a cave of polar bears.”

Following the class, several of the student groups continued their work with Jim Schmiedeler, a Notre Dame professor of aerospace and mechanical engineering, University psychology researchers Charles Crowell and Michael Villano and rehabilitation therapists from South Bend’s Memorial Hospital. The software was expanded upon by Michael Kennedy, one of Schmiedeler’s graduate students, with ten stroke victims over the past year at Memorial Hospital. Initial test results showed that the system held significant promise. Patients were able to gauge their balance and make adjustments while using the balance board and watching a screen hooked up to the Wii controls. Therapists were able to offer guidance to the patients as they also viewed the screen.

The researchers hope that the technology can eventually be developed into an at-home therapy, which will further lower costs and provide patients with a greater sense of independence.

Striegel and his fellow researchers hope that future groups of students enrolled in the class will be able to extend the technology to applications for amputees and those rehabbing from sports injuries.