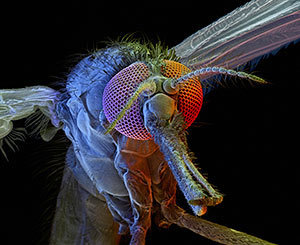 In work published this week in Nature: Scientific Reports, a team of researchers from the University of Notre Dame’s Eck Institute for Global Health, led by Associate Professor Giles Duffield and Assistant Professor Zain Syed of the Department of Biological Sciences, revealed that the major malaria vector in Africa, the Anopheles gambiae mosquito, is able to smell major human host odorants better at night.

The study reports an integrative approach to examine the mosquito’s ability to smell across the 24-hour day and involved proteomic, sensory physiological, and behavioral techniques. The researchers examined the role for a major chemosensory family of mosquito proteins, odorant-binding proteins (OBPs), in the daily regulation of olfactory sensitivities in the malarial mosquito. It is thought that OBPs in the insect antennae and mouth parts function to concentrate odorant molecules and assist in their transport to the actual olfactory receptors, thereby allowing for odorant detection. The team revealed daily rhythmic protein abundance of OBPs, having higher concentrations in the mosquito’s sensory organs at night than during the day. This discovery could change the way we look at protecting ourselves from these disease-carrying pests.

The team also included Matthew M. Champion, Eck Institute for Global Health Research Assistant Professor in the Department of Chemistry and Biochemistry, who specializes in proteomics. 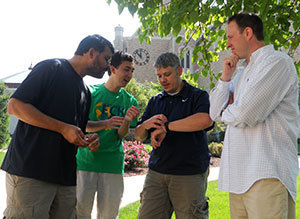 Rund noted, “This was an exciting opportunity to bring many people and techniques together to make some really fascinating findings on the mosquito’s ability to smell humans, its host. Just think, during the day the mosquito is sleeping and doesn’t need to smell you. But when the sun goes down, the mosquito’s olfactory system becomes extra-sensitive, and she is ready to smell and then bite you.”

The project was a follow-up to their earlier work that utilized genomic tools to reveal 24-hour rhythmic patterns of gene expression, including many genes involved in olfaction. 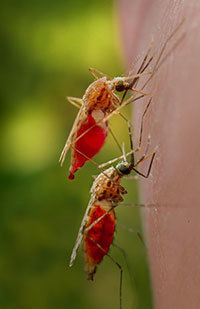 Rund and Duffield’s earlier work with collaborator James Gentile from Notre Dame’s Department of Computer Science and Engineering, “Extensive circadian and light regulation of the transcriptome in the malaria mosquito Anopheles gambiae,” helped lay some of the foundation to their findings. The paper, published in BMC Genomics in April, further examined the regulation of rhythms in gene expression at the molecular level, highlighted important differences in biological timing between Anopheles gambiae and the important dengue vector, Aedes aegypti, and highlighted the important role of light in organizing and modifying gene expression.

Anopheles gambiae is the primary species that is responsible for the transmission of malaria in sub-Saharan Africa, with approximately 300 million infections and 1 million deaths annually. The fact that these studies were conducted in Anopheles gambiae mosquitoes has important implications for the development of novel insect control methods with the potential to reduce the transmission of malaria parasites and thus the morbidity and mortality associated with malaria disease. This work provides the first comprehensive evidence of the important role of daily rhythms in the sensory biology of Anopheles gambiae and the implications for developing new control methods.

In addition to funding from the Eck Institute for Global Health, the team received support from the National Institutes of Health-funded Indiana Clinical and Translational Sciences Institute, and the University of Notre Dame’s Center for Rare and Neglected Diseases.

The Eck Institute for Global Health is a University-wide enterprise that recognizes health as a fundamental human right and endeavors to promote research, training and service to advance health standards for all people, especially people in low- and middle-income countries, who are disproportionately impacted by preventable diseases.