Despite widespread drought across much of the United States, West Nile virus is on the upswing. A mild winter, followed by a wet spring, allowed mosquito populations to build up early this season. And the subsequent scarce rains and intense heat led to stagnant water pools which are ideal breeding grounds for mosquitoes. 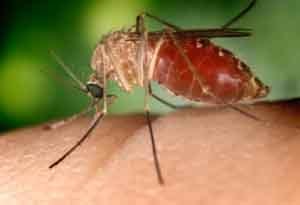 Zainulabeuddin Syed, a mosquito biologist with the University of Notre Dame’s Eck Institute for Global Health, has gone a long way toward explaining the extraordinary ability mosquitoes have to find us and infect us with diseases such as West Nile.

In short, it’s because of the way we smell.

For example, Culex mosquitoes, which transmit West Nile and other life-threatening illnesses, are able to detect even minute concentrations of nonanal, a chemical substance given off by humans. They detect nonanal through receptor neurons on their antennae. Birds, which are the main hosts of mosquitoes, also give off nonanal. Birds are the main source of the West Nile virus, and when mosquitoes move on to feast on humans and other species, the mosquitoes transmit the virus to them.

An understanding of the olfactory behavior of mosquitoes that leads them to feed on humans can play an important role in developing more effective methods of mosquito and disease control. 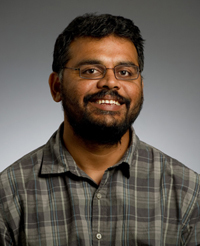 Syed is also researching the role that plants play in mosquito behavior. He points out that despite our occasional feeling that we’re surrounded by hordes of hungry mosquitoes, they spend a relatively short amount of time feeding. Rather, they spend considerable time on plants, taking the sugars that provide energy for those occasions when they do feed.

The Notre Dame researcher’s lab is studying what scents plants that mosquitoes are attracted to give off. Again, a deeper understanding of the role of the chemicals produced by plants and how mosquitoes select plants to obtain their energy sources can lead to better control and elimination strategies.

Syed points out that DEET still is an effective mosquito repellant and he was one of a team of researchers who revised the conventional understanding of how it works. The prevailing wisdom among researchers was that DEET was effective because it masked odors that attract mosquitoes. However, research by Syed and his colleagues showed that mosquitoes smell DEET directly and avoid it.

For many of us, better mosquito control techniques would result in greater comfort and convenience when we’re outdoors. In many areas of the world, however, mosquito control is a matter of life and death. In Africa alone, malaria, one of the many diseases transmitted by mosquitoes, takes a human life, most frequently a child’s, every 30 seconds. A better understanding of the role smell plays in mosquito behavior can offer important clues that may lead to new control strategies.