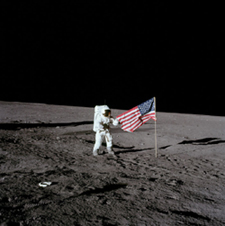 It was 40 years ago that Apollo 11 astronaut Neil Armstrong exited the LEM (lunar excursion model) Eagle, set one foot onto the surface of the moon, and said, “That’s one small step for (a) man, one giant leap for mankind.”

University of Notre Dame researchers involved in planetary sciences are among those recalling that remarkable milestone. Some of their reflections follow:

Clive Neal, professor of civil engineering and geological sciences, is chair of NASA’s Lunar Exploration Analysis Group (LEAG), which is responsible for analyzing scientific, technical, commercial and operational issues associated with lunar exploration. The group provides findings from these analyses to NASA through the NASA Advisory Council. As LEAG chair, Neal also serves on the Planetary Sciences Subcommittee of the NASA Advisory Council.

“On July 20, 1969, I was 8 years old and not fully aware of the meaning of Apollo 11,” Neal said. “In England, where I was born and raised, the Apollo 11 landing occurred in the middle of the night and the first steps on the lunar surface during the early hours of July 21.

“It was my father, Dennis Neal, who got me out of bed to watch the landing and first ‘extra-vehicular activity,’ or EVA. I complained bitterly about getting up that early. But my Dad told me, ‘Son, this is history in the making and you need to see it.’

“How prophetic my Dad was, as I now have almost 25 years of experience analyzing the rocks brought back by Apollo 11 and the subsequent Apollo missions. Thanks, Dad!”

Ani Aprahamian, professor of physics, has been intrigued by “star stuff” from an early age. In particular, she is interested in the nuclear reactions at the heart of stars, supernovae and other cosmic events.

Her research is aimed at gaining an understanding of the elements of the universe.

“When the Apollo 11 moonwalk took place, I was a fifth grade student in an Armenian school in Beirut, Lebanon (funded by some American benefactors,” Aprahamian said. “My most vivid memory is the conversation I had with my grandmother, who was taking me to the market the following morning. She was very troubled that the Americans had interfered with God’s work by going and walking on the moon."

“On the other hand, my excitement could barely be contained. I was excited for the U.S. and for all of us in the world. I wondered what lay beyond the moon in space and secretly felt sure that the Americans were going to take us there.”

“My father was applying for immigration to the U.S. for our family, and while I was sad to leave behind my classmates and my very large extended family of 35 cousins, all I could think about was going to the country that does science,” she said. “Perhaps naively, I had great faith in science as a solution to the problems of the Middle East and the world; away from science and toward the unraveling of facts.”

Thomas J. Mueller, Roth-Gibson Professor Emeritus of Aerospace Engineering, has received many NASA grants and been involved in research related to numerous NASA programs during his career. He is a recognized authority and leader in the aerodynamics and fluid mechanics community.

“I followed the Apollo program since I worked on one of the problems related to the Saturn V rocket while I was still working on my doctorate in 1960 and 1961,” Mueller said. “The second stage rocket motor, the RL 10, was designed and built by United Aircraft, where I worked from 1963 to 1965.

“I came to Notre Dame in April of 1965. My wife, two children (we had three more later) and I watched the landing on a black and white TV in the back yard because it was a hot night and we didn’t have air conditioning. We also saw the complete three-stage Saturn V rocket in the Air and Space Museum in Huntsville, Ala., in the early 1980s and the lunar module in the Air and Space Museum in Washington, D.C. several times.”