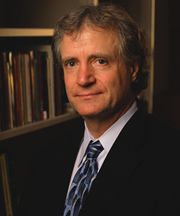 Scott Monroe needs only to see a television commercial for a depression drug to judge how much societys perception of the syndrome has changed.

Decades ago depression was a very different beast,said Monroe, who left theUniversityofOregonto join the Notre Dame faculty this semester as Warren Foundation Professor of Psychology.It was more removed from public consciousness. It was more severe in its clinical presentation.

In the mid-1960s, depression wasnt prevalent enough to interest pharmaceutical companies. This, of course, was all before Prozac.

Today it seems as if every person in American has a personal understanding of the symptoms and criteria depression,Monroesaid.

Society may more be growing familiar with the syndrome. But actual understanding is a long way off.

Monroehas researched depression since the mid-1970s, and initially focused on genetic causes. He decided to study the impact of stressful life events after he realized that, even for patients with a genetic predisposition, nothing explained why depression struck when it did. Behind his quest is the notion that different causes merit different forms of treatment, and that better understanding the causes of depression will lead to enhanced treatments. Although many people benefit from current treatments, a significant number do not.

In research he began at the University of Pittsburgh and continued at Oregon, working with a colleague from Stanford, Monroe employs a meticulous patient interview process that culls the events that occurred before depressions onsetthe death of a loved one, the end of a relationship, financial difficulties. A recently completed project sponsored by the National Institute of Mental Health reports on this research and is titledLife Stress and Cognitive Biases in Major Depression.

Monroes research has introduced him to a fascinating spectrum of patients and patient experiences. Hundreds of heart-rending interviews have taught him that reactions to adversity have many variations. These interviews have also illustrated a difficult dividing line between understandable human misery and clinical depression. There is no guideline to predict who will recover and rarely re-experience depression and who is destined for recurrence.

For those who experience recurring episodes,Monroes research indicates that the initial bout may be associated with a major life event, though later episodes can arrive seemingly unprovoked by circumstance.

Sometimes, people who experience multiple episodes of depression just wake up in the morning and know something has changed,he said.

He remembers the haunting, pleading eyes of a woman with a severe case of depression who convinced him that she had not experienced any terrible life events;she just couldnt feel anything.

Some empty people exist who have a brokenbrain, who may have a strong genetic predisposition to repeated episodes over time,Monroesaid.

This patient represents an extreme that most people are unlikely to experience.

Then there are peoplethat just get the psychological wind knocked out of them,Monroesaid. Psychology and psychiatry tend to understand syndromes as diseasesthey may try to liken depression to diabetes or a disease that calls for long-term preventive medication. Should treatment be developed that understands the condition as something more temporary?

Monroes move to Notre Dame will provide him with a more streamlined method of conducting research, as he begins to work with patients at nearbyMadisonCenter. The research he conducted inOregondrew information from patients being treated at Stanford, withMonroekeeping track of the research via teleconference. The planned growth of Notre Dames psychology department attracted him, as did the departments commitment to graduate education that emphasizes scientific research as a complement to therapy training.

Currently the president-elect of the Society for Research in Psychopathology,Monroehas written or co-written more than 65 articles, has served as an associate editor for theJournal of Abnormal Psychology __ and thePsychological Bulletin,and is a member of the National Institutes of Health grant review panel on Adult Psychopathology and Disorders of Aging. He holds bachelors degrees in mathematics and psychology fromSaintOlafCollege, a masters degree in clinical psychology from Southern Illinois University and a doctorate in clinical psychology from the State University of New York atBuffalo.