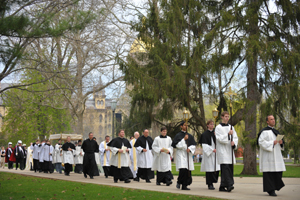 The congregants of the 11:45 Mass poured out of Notre Dame’s Basilica of the Sacred Heart last Sunday, some 500 of them, into the gusts of a stiff westerly wind which flapped the banners above the entrance, the vestments of a half dozen Holy Cross priests, the choir robes of the Notre Dame Women’s Liturgical Choir and the gold tassels fringing the canopy under which a consecrated host was born by one of the priests in a golden monstrance. They were singing “Sing My Tongue the Savior’s Glory,” a hymn to the Eucharist composed in the 13th century by Saint Thomas Aquinas which most Catholics of a certain age remember as “Tantum Ergo.”

This was the beginning of a Eucharistic Procession, once a yearly event at the University, and a campus tradition revived over the last five years by students from Notre Dame and Saint Mary’s and Holy Cross Colleges.

Eucharistic processions, along with many other forms of Eucharistic devotion, seemed to fade somewhat from Catholic practice in the years following the Second Vatican Council, but in recent years there is increasing evidence among Notre Dame students of a renewed interest in and enthusiasm for such traditions.

By extolling the consecrated host, these public devotions celebrate the belief that Christ is truly present in the Eucharist. Eucharistic processions, or “Corpus Christi” processions as they are often called, using the Latin words for “Body of Christ,” are a tradition dating back at least to the 13th century. The tradition was widely suppressed by the Protestant Reformation of the 16th century in much of northern Europe. In response, Catholic communities redoubled their zeal for the practice and towns often competed in sponsoring elaborate and well-attended processions on the holy day of Corpus Christi.

If such competitions were still in fashion today, Notre Dame’s would have done well. It uniquely and mysteriously combined the elation of a parade on a bright spring day—there was even a steak sandwich lunch served at its conclusion—with the recollected calm of private prayer. Led by the canopied sacrament, escorted by an honor guard of caped, quaintly armed and flamboyantly beplumed Knights of Columbus, perfumed by puffs of incense smoke and accompanied by ancient and contemporary sacred music led by Notre Dame’s various student choirs, the procession wound its way through the South Quadrangle, stopping at altars placed before the statues of the Sacred Heart of Jesus, Our Lady of the University and Notre Dame’s founder, Rev. Edward Sorin, C.S.C., and the steps of the Main Building.

At each of the altars, a Eucharistic hymn was sung as the crowd knelt and the Eucharist was venerated. Scriptural readings were followed, at the first two, by readings from meditations on the sacrament written by the founder of the Congregation of Holy Cross, Blessed Basil Moreau, C.S.C. At the altar before Father Sorin’s statue, there was a reading from a letter of Notre Dame’s founder, assuring a 19th century correspondent and a 21st century campus gathering that “our great consolation here is the Perpetual Adoration in our midst.”

At the last processional altar, kneeling at the foot of the Main Building steps, the procession’s participants were read words from Pope Benedict XVI, about the importance of precisely the sorts of festival they celebrated. “The Lord gives himself to us in bodily form,” Pope Benedict wrote. “That is why we must likewise respond to him bodily…Our religion, our prayer, demands bodily expression. Because the Lord, the Risen One, gives himself in the Body, we have to respond in soul and body…the bodily expression of our positive response to the real presence of Jesus Christ, who as God and man, with body and soul, flesh and blood is present among us.”

They were welcome words to hear, those thoughts about the human body we share with God, jostled in a colorful crowd with warm wind whirring one’s ears, the coarse concrete surface of a sidewalk pressing against one’s knees, aromatic wisps of incense in one’s nostrils as well as the faint and agreeable aroma of the steaks being grilled nearby. Thoughts of the Word made Flesh.