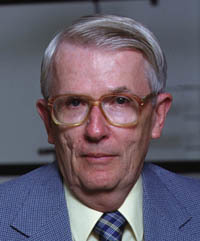 Michael K. Sain, Frank M. Freimann Professor of Electrical Engineering at the University of Notre Dame, died Tuesday (Sept. 22) morning of a heart attack at his home in South Bend. He was 72.

A native of St. Louis, Sain earned bachelor’s and master’s degrees from St. Louis University in 1959 and 1962, respectively, before earning his doctoral degree from the University of Illinois in 1965 and joining the Notre Dame faculty that same year.

Among the first of Notre Dame’s chaired professors, Sain flourished in his chosen field of scholarship. A pioneer of statistical control theory, he also worked in a wide variety of other areas, including game theory, algebraic system theory and structural control for buildings, bridges and other structures subject to high winds and earthquakes. He was the author or co-author of some 400 reviewed publications and a prominent member of the Institute of Electrical and Electronic Engineers, serving for four years as editor-in-chief of its Transactions on Automatic Control, the journal of record in systems, circuits and control.

Four years ago, Sain began to teach an innovative, if not unprecedented, undergraduate course titled “Theology and Engineering,” conducting an improbable dialogue between the two disciplines: Grace is considered alongside exogenous loop signals, the actions of the Holy Spirit alongside inner state feedback loops, the Fall alongside parameter uncertainty, virtues alongside feedback control laws, and the Beatitudes alongside coordinated loop excitations.

It was a very popular course and Sain was at least as enthusiastic about it as his students. “To integrate what I believe about God with what I think and do as an engineer is the most important thing that has happened to me here at Notre Dame,” he once said. “It is a genuine joy to do this work, to give and take with the students about it, and to contribute in some small way to what makes Notre Dame more unique as a place to live and grow.”

According to Sain’s colleague, Thomas E. Fuja, chair of Notre Dame’s Department of Electrical Engineering, the course “brought together two of his passions – system theory and the search for a better understanding of God. Mike was deeply committed to his Catholic faith and to Notre Dame as a Catholic university. This led him to find bridges between his technical discipline and Catholic moral teachings.

“He did it not because of any research glory it may have brought him—believe it or not, the research community at the intersection of engineering and theology is pretty sparse—but because he is a teacher and he wanted to share what he understands, because that’s what teachers do.”

Kaniewski Funeral Home is in charge of arrangements.