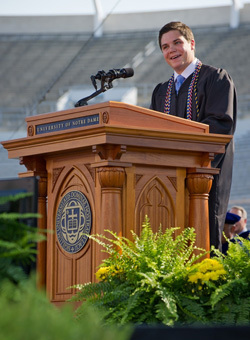 Mrs. DeMaria, Father Jenkins, distinguished faculty and guests, family, friends and fellow graduates: Nearly four years ago, we gathered together for opening Mass at the Joyce Center to take a break from the festivities of freshman orientation and mark before each other and God the beginning of a chapter of countless shared challenges and new opportunities. Our time here started with dorm room decorations, Disney song serenades, kilted marches across South Quad, and the most awkward dance ever devised — Domerfest. Those days of Frosh-O eliminated virtually every conceivable barrier of social convention and mental reservation to finding new friends and new interests in our new home. Amid all the excitement, I remember sending an email to my mom, saying: “This is the best university education I can imagine.” “Classes,” she promptly replied, “don’t start until tomorrow.” We thank our families for providing us love, support and encouragement at all times, and small doses of reality when needed.

Once I did reach my first class, the professor, before delving into the syllabus, handed out a familiar passage from the Gospel of Luke. It read: “No one, when he has lit a lamp, puts it in a cellar or under a basket, but on a stand, that those who come in may see the light.” Today, as we gather for one last time before moving on to confront new challenges and embrace exciting opportunities, let us reflect upon our uncommon privilege: the chance to spend four short years of our lives at Notre Dame, a place whose world-class education lights minds and hearts, that we can share this incredible privilege with those outside our community and our country. A place that puts the lamp of Catholic learning on a stand of public purpose.

The practice of meeting new people and experimenting with new ideas and activities didn’t end with orientation weekend — it is something we continued to do in classes, dorm life, undergraduate research, Center for Social Concerns seminars, studies abroad and student clubs. We built schools in the foothills of Appalachia, cooked meals for the homeless in South Bend, boxed for Holy Cross Missions in Bangladesh, and made works of art in campus plays, musical groups and art studios. All the while, we grew in knowledge and perspective — not simply by processing information, but by engaging with new ideas. We didn’t just memorize chemistry and biology formulas, we applied our knowledge to AIDS and cancer research; rather than keeping fields like economics and philosophy conceptually separate, we contemplated together their implications for poverty, growth and human happiness; and we of course didn’t merely learn about religious belief in our theology classes, we deepened our own beliefs in Masses and retreats and challenged them in campus debates.

After all of this, the obvious question before us is: What’s next? Not just what job, or what grad program. Undoubtedly, the range of options before each of us is as expansive as it is impressive: stretching from medical school to military service, from teaching to engineering. But what’s the next step in our development? The real world, after all, has no freshman orientation, and many of us may be left feeling, in the words of “The Office’s” Dwight Schrute, as though we have ‘nothing on our horizon — except everything.’ The freedom before us — once combined with an understanding of the complex, varied and often tragic problems facing the world — can be paralyzing. And our choices will likely be made even more difficult by the combative atmosphere in which much of human activity, from politics, to business, to academia, now takes place.

“The most striking feature of contemporary moral utterance,” writes our own Alasdair MacIntyre, “is that so much of it is used to express disagreements.” This has certainly been at least partially true of our time at Notre Dame. We leave behind us a trail of heated Viewpoint wars that were never resolved and classroom debates that all too often ended in deeper division and harder questions. But the troubles of our moral discourse seem infinitely more acute in the world outside Notre Dame. It is a world in which our differences often give way to profound disagreements; and as a consequence of the difficulty of articulating, balancing and prioritizing our different values and claims about this freedom or that right, our interpersonal setting continues to grow more and more antagonistic. Such an atmosphere, contoured by diversity that often turns into division and punctuated by outbursts of insensitivity that discourage us all, might tempt us to withdraw from the world’s challenges and focus exclusively on our own individual pursuits. I doubt this sounds new to anyone. We’ve all already witnessed this environment, but now we have to live in it.

When I interned for a senator in Chicago the other summer, I saw my fair share of division and disagreement — and the disappointing conduct to which it often gave rise. One moment stands out as an illustration of how all that is bad in the world can dishearten all that is good in us. A man who was very frustrated with his financial situation and the state of government in general called on the office one day and, speaking to a fellow intern and friend of mine, made a cruel comment about American Jews. Tears welled up in my friend’s eyes, and I noticed something about her for the first time: hanging around her neck in sterling silver was the Star of David. For each instance of the unkind and sometimes hateful interaction that too frequently arises out of our frustration with political, moral, religious and other forms of disagreement, there is usually an accompanying measure of sadness and pain that distresses those who find themselves at the receiving end of a given conflict.

We enter a world whose diversity of traditions, backgrounds and philosophies is at times a testament to our cultural richness — and at others kindling for fiery disputes that further entrench us, foster callous behavior and leave us uncertain of how to respond. Our politics is just one example. The schools we teach in will have bullies who prey on students who seem different and out of place; some of the businesses we work in might have advancement practices that pit their employees against each other and even their own customers for the sake of the next quarter’s profits; and perhaps some of the universities we next attend might let a lack of religious affiliation subtly discourage commitment to much religious activity at all.

It would be naïve to think that the harsher aspects of the environment outside our relatively harmonious bubble won’t tempt us to retreat inwards — to take our fresh degrees, enter our chosen careers and resign ourselves to the notion that modern social life is and will remain a sphere of hopeless divisions better left alone. We could avoid much frustration by simply turning away and focusing on our own individual goals. This would be much easier. Nevertheless, I’m confident that our experience at Notre Dame leaves us with an awareness that our problems call not for less engagement with the world, but deeper engagement; not less debate, but higher quality debate; not fewer accounting majors, but more accountability in our businesses. I do not think our class will consider retreat from the world’s challenges an option. I do not believe the lamp will be placed in a cellar or under the basket.

Certainly, inward retreat has never been the tradition of Notre Dame. It was not the tradition built by a priest whose faith was so great that he traveled to northern Indiana, braving poverty and bitter cold, and founded a school that has blossomed into something lasting, beautiful and golden. Retreat was not the tradition of a young man who, despite a rough upbringing and rejection after rejection — despite being “5 foot nothin’ and 100 and nothin’” — thought that he too could learn in legendary lecture halls and, where we stand today, fight alongside the Irish. Nor was inward retreat the tradition of our Father Hesburgh, who changed Notre Dame forever and for the better by opening its doors to women for the first time, and who stood hand-in-hand with a King to open the gates of justice and the blessings of civil rights to all Americans. This tradition lives on today: in the kind devotion of Father Monk Malloy who still resides with students in Sorin College; in the resolve of Father Jenkins in choosing respect and dialogue over adversity and division; in the wisdom of students who recognize that, while hard work can light minds, the world also needs hearts glowing with compassion before it can become a brighter place. Notre Dame has prepared us, as Scripture tells us, to “turn the darkness into light … and make the rough places smooth.” That hard, Sisyphean task of coming together to build a better world—at times seemingly against all odds, always knowing that no solution is final, that new challenges will inevitably arise, is a ‘tradition that never graduates.’

The world needs Notre Dame graduates as doctors and schoolteachers, as innovators and the businesspeople who finance them, as engineers to build the next economy and public servants to build bridges out of poverty, as PTA chairs and little league coaches, and as mothers and fathers who might even raise future Domers of their own some day. There is disagreement and there is selfishness in the world, there is injustice and there is darkness; but there is also Notre Dame. There is an education that can shine a healing light on the divisions and challenges afflicting the world. Like the flickering candles of our Grotto, which glow brighter the more our hopes and prayers are bound together, our class is placed on a stand thousands of alumni strong who use the knowledge and skills they gained here to brighten the world in ways big and small, in the public sector and in the private sector, in their communities and in their families. We join them today. “No one, when he has lit a lamp, puts it in a cellar or under a basket, but on a stand, that those who come in may see the light.” Let’s preserve this tradition. Fellow graduates: Congratulations.