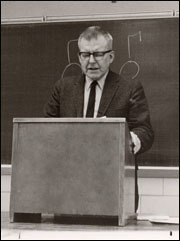 Early in the summer the Notre Dame campus gradually empties itself of students and faculty, the days calm and lengthen, and certain great souls linger on the grounds like innuendos in a story.

Among the greatest of these is surely that of the poet Ernest Emanuel Sandeen, whose death in the summer of 1997 ended a half-century tenure which endures as one of Notre Dames most splendid treasures.

One of the finest poets in a generation which included W.H. Auden, Denise Levertov and Richard Wilbur, Sandeen chaired Notre Dames English department from 1965-68 and received several honors for his teaching.His kindness to students and colleagues, his enthusiasm for poetry, and his commitment to the work of beginning poets ranked his courses among the most popular in the College of Arts and Letters.He liked to convene his poetry writing classes in the living room of his home on Ponsha Street in South Bend, where he and his wife, Eileen, also were the hosts of countless dinners and long evenings which became legendary among undergraduate English majors and graduate students.

A punctilious craftsman, Sandeen nevertheless displayed a limitless and encouraging patience with clumsier practitioners, and his criticism was always markedly gentle.You ought to assume that your reader is at least as intelligent as you are,he once teasingly admonished a swaggering student.Another student, who would later become a colleague, might have been speaking for numerous alumni of the English department when he said of Sandeen,I matured in the sun of his respect.

He was not a tall man, nor a stout one, but his presence behind an OShaughnessy Hall podium always managed to convey a titanic and granite-dense solidity, and a piercing singleness of purpose offset his quiet style of speaking, his pipe fumbling and gentlemanly deference to his students.Poetry was as serious as life to him, was life itself, in fact, and when his frowning gaze would bear down on the written wordwhether an ancient poem, his own work or that of a student poetit had the keen glint of an anglers eye searching for a flash of silver movement beneath a lake surface.When there was laughter in his classroom, as there often was, he would join in and stand smiling before his students as it diminished, and the joy would recede from his eyes last of all.His students loved him.

The poet laureate Robert Pinsky wrote of Sandeens poems that they recordnot only a writing life, but a life in writing: a history of the hours when reflection turns to discovery, and observation finds its fulfillment in the rhythms of a sentence, the weaving of consonants through a line, in pursuit of a mystery.Few poets have been blessed with the gift to sustain that process of meditation, composing and questioning so consistently, and for so long, in works that are clear and clear-eyed, passionate and precise.

Although a congenial man, Sandeen often seemed shy, and particularly so when discussing his own work.An assertion in the introduction to hisChildren and Older Strangersis perhaps the most unguarded assessment he ever made of his poems:All I know,he wrote,is that they provide for me an intimately personal record:the poems tell me, as no diary or journal could, where I was at various times in my life and how it felt to be there.I hope there will be readers who recognize the same places in their interior experience even though they may be far removed from me in chronological time.

It would take a great deal more than mere chronological time to remove us from that mighty poets soul, and on a recent stroll through Notre Dames Cedar Grove Cemetery, where Ernest Emanuel Sandeens 88-year-old flesh and bones were buried eleven years ago, it was easy to remember the lines ofThe Return,written inand fromhis last few years in this world:

Dig me a hole as big as the earth
says the boy, where I can keep my things,
soul and all, Ive come back to stay.

And so the earth comes back to stay
The boys hair by now is white
yet everything comes right.

The boy has proved his mothers
and fathers pleasure, he has measured
how a lonely planet loves.

_Earth and boy agree on skull and bone,
each calls to the other, Come home,
come home.
_