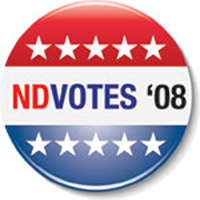 Two of the 2008 presidential campaigns leading policy advisors will speak at a forum at 6 p.m. Tuesday (Oct. 28) in the McKenna Hall auditorium at the University of Notre Dame.

Ike Brannon from Sen. John McCains campaign and Howard Lerner, an aide to Sen. Barack Obama, will discuss issues related to energy, the economy, national security and health care. Sponsored by the nonpartisan NDVotes08 program in the Center for Social Concerns, the event will be moderated by Rev. William M. Lies, C.S.C., executive director of the center, and is free and open to the public.

Lerner advises the Obama campaign on environmental and renewable energy issues. An attorney, he serves as the executive director of the Chicago-based Environmental Law and Policy Center, the Midwests leading public interest environmental and sustainable development organization. Lerner previously was general counsel at Business and Professional People for the Public Interest, a public interest law center specializing in complex civil litigation and policy development.

Brannon serves as senior policy advisor for the McCain campaign after previously working as senior adviser for tax policy in the U.S. Treasury.He was the principal economic adviser for Sen. Orrin Hatch on the Senate Finance Committee and chief economist for the Joint Economic Committee. He also previously served as senior economist for information and regulatory affairs in the Office of Management and Budget.

Since 1983, the Center for Social Concerns has been the service and community-based learning center for Notre Dame. The center invites students, faculty, staff and alumni to think critically about todays complex social realities and about their responsibilities within them, in an effort to embody the Universitys missionto create a sense of human solidarity and concern for the common good that will bear fruit as learning becomes service to justice.