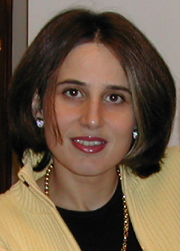 As a child growing up in Italy, Claudia Polini was good—very good—in math, but imagined that she might one day become a lawyer—or perhaps a missionary—because she wanted to make an impact on the world.

“Math is not what I thought I’d do for a job,” she says. “When I was in middle school and high school, I always thought, math, what can you do with it? Now that I’m a mathematician, I know you can have a degree in mathematics and do almost anything—it’s a universal key.”

Today, Polini, a professor of mathematics and a specialist in commutative algebra and algebraic geometry at the University of Notre Dame, makes an impact by conducting research, teaching graduate and undergraduate students—and encouraging and supporting girls and women in the pursuit of advanced studies in mathematics.

Polini’s area of math is algebra, and algebra as it applies to geometry. Many areas of research—genetics, biostatistics, cryptography and neuroscience—express information as a system of equations. “The way they interpret is my kind of algebra,” she says.

As an undergraduate, Polini studied at the Universitá degli Studi di Padova (Padua), one of the oldest universities in Italy. “Where Galileo was a teacher,” she notes.

In the course of her undergraduate studies, she first tried areas other than mathematics, including biology—which she thought was boring—and engineering, which she didn’t find rigorous enough. By the end of her first year of college, she had switched to math.

“And knew right away what I wanted to do—pure mathematics. I still didn’t know what I would do for a job. But I discovered you could be a mathematician and prove theorems. After two years at university, I knew that was my career.”

Polini always enjoyed the support of her Italian family, even as the pursuit of advanced studies led her to America, and Rutgers—doctoral programs in Italy were not rigorous enough, she felt. “My father made me promise I would come back in four years. Obviously, I did not go back,” she says with a smile.

She recalls the move to America to study as difficult. When she arrived at graduate school in New Jersey, she could read and write—but not speak—English. “They’d write everything on the board, so I could understand the class. But I couldn’t speak, so I was smiling all the time.” She met her Greek husband, Hristos Kirgios, in graduate school, she adds. “He spoke French, so I could relate.”

Polini attributes her advancement in a traditionally male-dominated field to the support of her family—and her husband. “It’s hard,” she says. “I don’t think I could have made it without him.” Early in her career, Polini says, they realized that in order to follow her, he would have to own his own business.

Polini, who’s been at Notre Dame since 2001, has two daughters, ages nine and 14. Her parents come from Italy every year for a two-month visit. And since she frequently travels out of the country to conferences in the summer, her daughters spend one month in Italy with her parents, and one month in Greece with her husband’s family. That way the family stays connected and her daughters maintain their language skills—they speak both Italian and Greek.

She is very much involved in both graduate and undergraduate mathematics education at Notre Dame and advises the campus chapter of the Association for Women in Mathematics (AWM), an organization in which she is active at the national level.

Of Notre Dame she says, “It was a good choice for me. I love the balance here, between teaching and research. We have very good students, and we want quality teaching—but also we want excellence in research.”

Both are equally important to Polini. “Teaching is my vocation,” she says. “I’m very blessed. I was very fortunate, and I want to give back everything I got.”