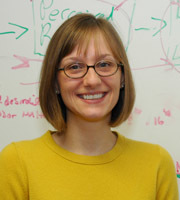 Why are American schoolchildren so bad at algebra?

University of Notre Dame psychologist Nicole McNeil has a theory—and it has to do with the way arithmetic is taught in school.

“The ways we’re taught may actually hurt our natural abilities to think about math,” she says.

McNeil, an assistant professor of psychology, is the recent recipient of a Presidential Early Career Award for Scientists and Engineers, which honors outstanding young researchers and is the highest honor a beginning scientist or engineer can receive from the U.S. government.

An experimental psychologist who joined the Notre Dame faculty in 2006, McNeil investigates the ways children think, learn and solve problems in math.

“I study children’s cognitive development, and how their thinking changes over time,” she explains.

Previous research has shown that very young children—even infants—demonstrate a fairly sophisticated understanding of fundamental math concepts, McNeil says. But math often is difficult for children to learn in school, and many children—and adults—fail to achieve basic competency in algebra.

The reason why, McNeil says, may be explainable in terms of a simple math problem involving equivalents: 3+4+5 = 3+__.

Most of us can think a minute and come up with the right answer—nine. But a substantial majority of children will arrive at an incorrect answer—15.

“They simply add up the numbers from left to right,” McNeil says.

The curious thing, she adds, is that seven-year-olds are better at solving these problems than nine-year-olds. That’s counter to developmental theories, which predict that children’s problem-solving abilities will get better over time.

There are many differences in the Chinese and American educational systems, McNeil notes.

“In Asia, they spend more time in school, and they learn more math,” she says. “But they’re also taught differently.”

“It’s all speculation, but I think the way we teach children when they’re little has a lasting effect,” McNeil says. “Students educated in East Asian countries look at the equal sign as the central thing. The U.S. students read from left to right.”

McNeil and her students in Notre Dame’s Cognition Learning and Development Lab (CLAD) currently are in the second year of a four-year grant researching the question of whether children can benefit from small modifications in the structure of their arithmetic practice.

Children ages seven and eight are randomly assigned to one of two groups and practice arithmetic one-on-one with a trained math tutor for 30 minutes once a week. One group is taught traditional math facts, while the other focuses on equivalents. The strategies that seem promising will be incorporated into a workbook—which will be further tested—that teachers can use in the classroom.

“Along with arithmetic practice, we want to figure out what aspects are essential for moving to the next level, that will facilitate the transition to algebra,” McNeil says.