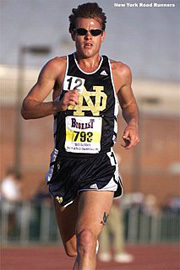 The Notre Dame Club of Staten Island will mark the first anniversary of the death of University of Notre Dame alumnus Ryan Shay with a memorial Mass at 5 p.m. Saturday (Nov. 1) at Capodanno Chapel at Fort Wadsworth, Staten Island, N.Y.

One of the greatest student-athletes in Notre Dames history, Shay died Nov. 3, 2007, while participating in the U.S. Olympic marathon trials in New York City. An autopsy found that he died of an irregular heartbeat due to an enlarged heart. He was 28.

A 2002 Notre Dame graduate from Central Lake, Mich., Shay won the NCAA 10,000-meter race in 2001 and earned All-America honors in nine events during his cross country and track careers. He also earned academic All-America honors as an economics and computer applications major.

The University paid tribute to him Oct. 4 when his parents, Joe and Sue Shay, presented the national colors prior to the Notre Dame-Stanford football game.

Also this weekend, 19 of Shays former teammates from Notre Dame and 15 relatives of his widow, Alicia, will pay tribute to him by running in the New York City Marathon on Sunday.

More information on the marathon tribute by Shays teammates and relatives is available in a New York Times feature story at http://www.nytimes.com/2008/10/27/sports/othersports/27notre.html?_r=1&scp=2&sq=ryan%20shay&st=cse&oref=slogin .