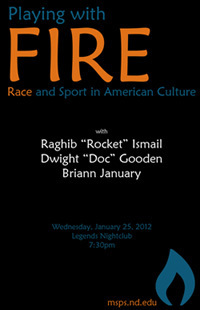 All the conference discussions, collectively entitled “Playing with Fire: Race and Sport in American Culture,” will begin at 7:30 p.m. in the Legends nightclub each Wednesday night from Jan. 25 through Feb. 15. The series is open to the public.

Now in its third year, the Martin Luther King Jr. Series is hosted by the University’s Multicultural Student Programs and Services to encourage conversation and scholarship about the historical, cultural and psychological impact of race in social life in America and at Notre Dame.

On Feb.1, the discussion leader will be Jay Alexander, head coach of the Eastern Michigan University Eagles baseball team.

On Feb. 15, the discussion leaders will be Pam Oliver, Fox Sports reporter; Dr. Richard Lapchick, director of the National Consortium for Academics and Sports and of the Institute for Diversity and Ethics in Sports; and Earl Smith, professor of sociology and director of the American Ethnic Studies Program at Wake Forest University.