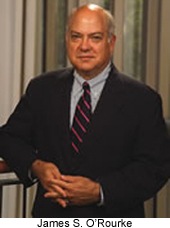 The case study method is a well-established, effective and traditional teaching tool in business education.p. But what’s a professor to do when few, if any, cases relevant to a subject are available?p. That was the dilemma James S. ORourke, director of Notre Dames Fanning Center for Business Communication, faced in the early 1990s when he began looking for case material for courses on corporate communication. Finding little, he and other faculty at Notre Dame began to research and write their own case studies on various communication issues, including crisis management, reputation management, customer relations, employee communication, media relations, image and identity management, and public affairs.p. In time, O’Rourke brought MBA students into the research and writing process, and now, 10 years later, the Fanning Center has more than 115 cases available for use by faculty and students nationwide. All but a few are accompanied by teaching notes and a PowerPoint slide deck.p. ORourke calls the ongoing work a classic example of necessity being the mother of invention.p. There were so few cases available from other sources that were relevant to our teaching,he said.We needed classroom instructional instruments that would help our students explore the issues we thought were important.p. The Fanning Centers backlist includes such well-known cases as the New York Times/Jayson Blair imbroglio, the travails of Martha Stewart, and the membership controversies surrounding the Augusta National Golf Club. The full list is available at http://www.nd.edu/~fanning/cases/cases.html .

The best evidence for the value and quality of the Fanning Centers resource is that faculty from more than a dozen business schools – including Wharton, Tuck, Darden, Marshall and Goizuetta – now purchase cases from Notre Dame for a small fee.

Many more schools have adopted for the classroomThe Business Communications Casebook: A Notre Dame Collection,which was published in 2001 by Thomson South-Western College Publishing and includes 36 cases, including crises at Denny’s restaurants, Firestone, Texaco and others. In addition, public relations agencies have purchased cases for use in background research on potential clients, and publicly traded firms – most recently Boeing and ConocoPhillips – use the cases for in-house training.p. For Notre Dame MBAs, it’s been a win-win situation. They learn from the cases while gaining immeasurable experience working closely with O’Rourke on research and writing.p. Joshua Berlo, who graduated with an MBA in May, says work on a case study of Emulex, Inc., helped himdevelop an in-depth understandingof the power and importance of communications in a crisis.p. Emulex, the worlds largest producer of fiber channel host adapters, was the victim of a stock price manipulation hoax in 2000. A fictitious press release claiming key executives had resigned and earnings estimates had been revised was circulated on the Web and picked up by mainstream media outlets. The result was share prices falling from $113 to less than $43 in a matter of hours as more than $2 billion in market valuation evaporated.p. Berlo and his co-author, 2002 graduate Joseph Worrell, described the hoax and explored the crisis communications issues from multiple angles.p. Through our writing of the case,Berlo said,we examined it from three perspectives: that of the actual case participants, using ourselves as decision makers, and the perspective of the readers of the case.p. Authoring a case requires the writers to not only review the situation, but also to consider what the readers of the case may suggest for courses of action. Case study is a valuable learning tool, but when writing a case, you are forced to go beyond the pitfall of 20-20 hindsight to consider all factors of the cases, how to frame them, and the possible outcomes.p. Berlo and Worrell were honored for their work with the first-place prize in the 2002 Arthur Page Society corporate communication case writing competition. A year later, Notre Dame MBAs Kathryn Huang and Megan VanAelstyn took the top prize with their case study of Wyeth Pharmaceuticals.p. In addition to the case study project, the Fanning Center offers a dozen graduate and undergraduate courses in writing and speaking, hosts conferences and seminars, and sponsors awards and scholarships for outstanding students. The center was established in 1990 and in 1996 was named in honor of the late Eugene D. Fanning, a Notre Dame graduate, business executive and teacher.p. ORourke joined the Notre Dame faculty in 1990 and has been the Fanning Centers director since its inception. A Notre Dame graduate, he earned masters degrees from Temple University and the University of New Mexico and a doctorate from Syracuse University. He is a concurrent professor of management and the author ofBusiness Communication: A Framework for Success(Thomson South-Western, 2000),Management Communication: A Case Analysis Approach,(Prentice Hall, 2003, 2nd edition), and is senior editor of an eight-title series in managerial communication from Thomson Learning.p.