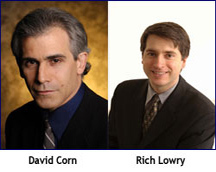 Two national magazine editors will debate issues in the 2004 presidential election at the University of Notre Dames Washington Hall at 7 p.m. Sept. 22 (Wednesday). David Corn, Washington editor of The Nation, will represent the liberal view, and Rich Lowry, editor of National Review, will render the conservative perspective. The event is free and open to the public.p. Corn, author of “The Lies of George W. Bush: Mastering the Politics of Deception,” has been critical of the Bush administrations handling of issues such as tax cuts, homeland security and the war in Iraq. He is a regular Fox News Channel contributor and writes on politics, the White House, Congress and national security. He authors the “Capital Games” Web column for The Nation and hosts the Web site www.bushlies.com .p. Corn has appeared on The OReilly Factor, Crossfire, Washington Week in Review, Hardball and C-Spans Washington Journal. He is a regular on NPRs “The Diane Rehm Show” and “To the Point,” and has contributed commentary to scores of call-in radio programs. Corns articles have appeared in publications such as the Washington Post, New York Times, Los Angeles Times, Boston Globe, Newsday and Harpers.p. Lowry covered Congress prior to being named editor of National Review in 1997. He writes a bi-weekly syndicated column for King Features and is a political analyst for Fox News. He has written for the New York Times, Washington Post, Wall Street Journal, Readers Digest and a variety of other publications.p. In his book, “Legacy: Paying the Price for the Clinton Years,” Lowry indicts the Clinton administration for “spins, lies and failures,” and he argues that Clinton “cringed and shrank” from the threat of Islamic terrorism.p. The Sept. 22 debate is sponsored by the Notre Dame Center for Social Concerns; College of Arts and Letters; Office of the Provost; First Year of Studies; Office of Public Affairs and Communication; Undergraduate Intellectual Initiative in the Office of Undergraduate Studies; Carey Chair in the Department of Film, Television, and Theatre; Kellogg Institute for International Studies; the Departments of English, Sociology and Political Science; Program in Liberal Studies; Multicultural Student Programs and Services; Childrens Defense Fund; College Republicans; College Democrats; and Rock the Vote MTV/ Youth Venture.p. _Contact: Kelly Roberts, communications director, Center for Social Concerns, 574-631-3209, roberts.84@nd.edu _ p. __ p.