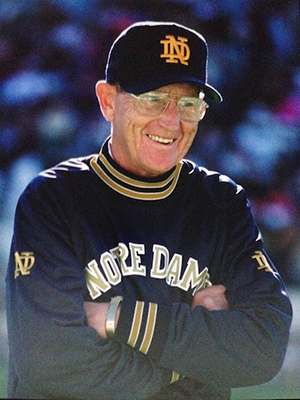 “We are blessed that Coach Holtz has accepted our invitation to celebrate and give thanks for the years of service to the ministry of Catholic education of our ACE graduates,” said Rev. Timothy R. Scully, C.S.C., founder of ACE and Hackett Family Director of Notre Dame’s Institute for Educational Initiatives.

“Throughout his career, Coach Holtz has shown a powerful commitment to form leaders of strong character and evangelical virtues, and his dedication and love for Our Lady’s University are unmatched,” Father Scully said. “His witness will resonate deeply with all members of the ACE community.”

At the annual Commencement exercises, scheduled for 3:30 p.m. in the DeBartolo Performing Arts Center, the University will bestow 108 graduate degrees upon the next generation of Catholic school teachers and leaders who completed their periods of formation with ACE.

A total of 83 ACE Teaching Fellows graduates, who pursued their two years of studies — while teaching in Catholic K-12 schools in underserved areas around the country — will receive the Master of Education (M. Ed.) degree. Twenty-five graduates from ACE’s Mary Ann Remick Leadership Program, whose 26 months of formation prepared them to be principals and other leaders in Catholic education, will receive a master of arts in educational leadership.

Holtz said he is excited to address the ACE graduates, most of whom will continue their careers as educators and leaders serving children from all backgrounds, many of them in Catholic schools.

“I think it is marvelous the difference the ACE program has made in the lives of so many young people,” Holtz said. “The sacrifice these educators have made to help younger people has been invaluable.”

Holtz coached the Fighting Irish football team from 1986 to 1996, and he led the team to a national championship in 1988. He also received an honorary degree from the University in 2011. He later became a football analyst for ESPN and remains a sought-after motivational speaker.