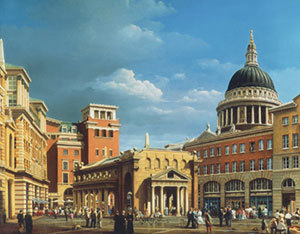 London architect John Simpson, one of the world’s leading practitioners of New Classicism and New Urbanism, has been selected to design the new School of Architecture building at the University of Notre Dame.

“Matt and Joyce Walsh Family Hall will be a symbol of the distinctiveness of the Notre Dame Architecture School’s curriculum, which focuses on traditional urbanism and classical architecture,” said Michael Lykoudis, Francis and Kathleen Rooney Dean of Architecture. “The design principles embodied in John Simpson’s built work reflect the principles and highest aspirations of our school, which embraces the timeless classical values of durability, functionality and beauty. Our students and faculty will have a building that will be inspirational and instrumental in the teaching of architecture.”

Simpson studied architecture at University College London and is principal of his eponymously named firm. A member of the Royal Institute of British Architects, he is a leader among modern architects designing in the New Classical style.

Simpson’s major works include the master plan for the area surrounding St. Paul’s Cathedral in London, the west range of Gonville Court at the University of Cambridge, the Queen’s Gallery at Buckingham Palace and the master plan for Fairford Leys, a village outside Aylesbury.

Notre Dame’s new building for the School of Architecture has been underwritten by a $27 million gift from Matthew Walsh and his wife, Joyce. The 80,000-square-foot building will be located on the south end of the Notre Dame campus, east of the DeBartolo Performing Arts Center. It will provide the space necessary to accommodate the needs of a school that is considered the nation’s leading institution for the study of classical architecture and traditional urbanism and to add two new graduate programs in historic preservation and real estate development. Construction is expected to begin next year.

The School of Architecture was established in 1898 as the first such program at an American Catholic college or university. For the past 20 years, it has put an emphasis on a classical curriculum to the point that it is considered the leading such program in the country. The urbanism curriculum is also highly regarded within the field.