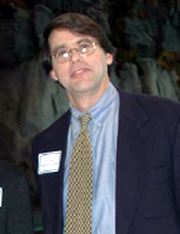 David M. Lodge, professor of biological sciences at the University of Notre Dame, is the lead author of a new Ecological Society of America (ESA) paper calling for a stronger government response to the problem of invasive species.

Titled,Biological Invasions: Recommendations for U.S. Policy and Management,the paper was released Friday (March 3) during a briefing at the National Press Club inWashington,D.C.

The paper warns that harmful, non-native speciesfrom combustible cheat grass to voracious carp to the West Nile virusare spreading intoU.S.lands and waters at an accelerating pace. Absent a new improved national strategy based on science, these invasive species will cause increasing damage to the nations natural and economic resources, according to the authors.

The increase in invasions in theU.S.and elsewhere is being fueled by the globalization of trade and travel. As the worlds largest economy and the home of many of the worlds richest ecosystems, theU.S.is especially at risk for additional biological invasions.

ESA contends that theU.S.strategy on invasive species lacks coordination or cost-effectiveness and that an urgent need exists for more effective means of prevention, eradication, and control of invasive species.

The ESA paper recommends that the federal government, in cooperation with state and local governments, take six actions:

Our recommendations are firmly rooted in the science of invasion biology,Lodge said.We believe that putting them into practice will substantially reduce future harm from invasive species.

Lodge and the other authors of the paper stress that when it come to non-native species, prevention is the best policy. Once harmful invasive species become widespread, management options are limited.

The nation simply bears the costs,Lodge said.But we recommend a much more cost-effective system of prevention, early detection, and rapid responsebefore the damages are irreversible.

Although theU.S.is confronted by a dizzying array of harmful non-native species, they all share a set of biological processes and pathways to introduction. The authors of the ESA paper contend that these common characteristics offer an opportunity for a science-based, cost-effective approach to protecting the nations ecosystems, economy and welfare.

Lodge, who also is a faculty fellow of Notre Dames Kroc Institute for International Peace Studies, served as the first chair of the national Invasive Species Advisory Committee.