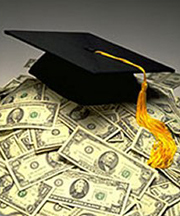 University of Notre Dame studentsextraordinarily low rate of default on student loans may be offering some cushion against the troubles of a shrinking college loan industry, according to Joseph Russo, director of student financial strategies in the Universitys Office of Student Financial Services.

Recently released data by the U.S. Department of Education indicates that Notre Dame studentsdefault rate on loans is only one-tenth of one percent, down from two-tenths of one percent the previous year.

Nearly 30 lending institutions that had been providing student loans to Notre Dame students have either exited from or suspended their involvement with the industry in recent months in the face of a crisis in liquidity and the unpredictability that this issue has fostered, according to Russo. For a time, until Congress stepped in, it appeared the entire student loan industry might fall apart. No long-term solutions have been identified, he says.

But those who remain as lenderswant to loan money to our students,Russo said.

I think lenders are happy to lend to our students for reasons that include low default rates, but also retention, on-time graduation of students, their satisfaction with the University, and the success they have in getting placed in jobs and graduate and professional school,he said.

Last summer was a wait-and-see one for the financial aid staff, which wondered if a shortage of loan money would affect familiesability to meet tuition costs and gain additional loan support for living expenses. That did not appear to be the case, Russo says.

As lenders left the business, some Notre Dame students had to find other sources for their loans, and did so successfully, he adds.The larger lenders, with long-term support for the student loan program, have generally continued their commitment.

While repercussions at the University from the loan crisis have been few in respect to access to financing, the financial aid staff is seeing the effects of the general downturn in the economy. As a consequence of the current economic difficulties, families are approaching the office with concerns about meeting their financial obligations because of lost income, lost jobs or a lost home.

We work with each family on a case-by-case basis,Russo said.The first message we strive to communicate is that we will continue to do everything within our ability to insure your continued enrollment at the University and to graduate. Sometimes all the family needs is understanding and time.