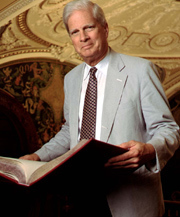 The University of Notre Dame will inaugurate the 2004-05 academic year Aug. 24 (Tuesday) with a convocation of the faculty, a Mass, and a campus picnic for faculty, administrators, staff and students, followed by a fireworks display.p. James H. Billington, librarian of Congress, will address the convocation, which will be held at 4 p.m. in the Decio Theatre of the new Marie P. DeBartolo Center for the Performing Arts.p. Sworn in as the librarian of Congress in 1987, Billington is the 13th person to hold the position since the library was established in 1800. A native of Bryn Mawr, Pa., Billington attended Princeton University and earned a doctoral degree from Oxford University, where he was a Rhodes Scholar. He taught history at both Princeton and Harvard universities and served as director of the Woodrow Wilson International Center for Scholars, where he founded the Kennan Institute for Advanced Russian Studies. Billington is the author of several books on Russian history and is the recipient of 33 honorary degrees, including one from Notre Dame in 1995.p. Mass for the opening of the academic year will be celebrated in the Joyce Center at 5:30 p.m. A formal academic procession of faculty will precede the Mass, at which Notre Dames president, Rev. Edward A. Malloy, C.S.C., will preside.p. A picnic will start at 7 p.m. on the DeBartolo Quadrangle, to be followed by a fireworks display at 7:45 p.m.p.