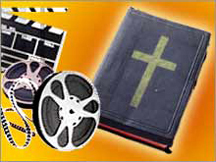 Three lectures on the role of Christian religious belief in the production and distribution of contemporary film and television programming will be given at the University of Notre Dame in April.

The lectures,Hollywood: Mission Field or Mission Impossible?are sponsored by Notre Dames Center for Ethics and Culture as its Spring Catholic Culture Series.

Rev. Willy Raymond, C.S.C., national director of Family Theater Productions, a Catholic production company in Hollywood, will give a lecture onYoung Catholic Hollywoodat 7:30 p.m. April 4 (Tuesday) in Room 127 of Hayes-Healy Hall.Father Raymond will speak of his ministry to young Catholics in Hollywood and of the medias possibilities as a means of Catholic evangelization.

Amy Welborn, syndicated columnist and author of the widely read Open Book Web log, will give a lecture on her recent bookDe-Coding Da Vinci: The Fact Behind the Fiction of The Da Vinci Code,at 7:30 p.m. April 10 (Monday) in Room 155 of DeBartolo Hall.Wellborn argues that Dan Browns best-selling novel hasa startling number of blatant, glaring errors on matters great and small that should send up big red flags to anyone reading the novel as a source of facts, rather than just pure fiction.

Barbara Nicolosi, founder and director of Act One Inc., a nonprofit organization that trains people of faith for careers in mainstream film and television, will give a lecture onWhy Does God Care about Hollywood? The Role of Entertainment in Human Lifeat 7:30 p.m. April 27 (Thursday) in Room 155 of DeBartolo Hall.Nicolosi has described Act One asan alternative to the top secular film schools. Going to one of those schools is still a tremendous advantage, but their underlying world view is radically nihilistic. As a Christian, you can learn the craft in those places but everything you believe will be ridiculed by your professors.

Contact:Elizabeth Kirk, assistant director of the Center for Ethics and Culture, at 574-631-9656 or ekirk@nd.edu