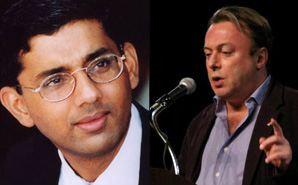 Two titans of the religious spectrum – atheist Christopher Hitchens and Christian writer Dinesh D’Souza – will engage in a public debate at the University of Notre Dame.

The debate, titled “Is Religion the Problem?” will take place April 7 (Wednesday) at 7:30 p.m. in the Leighton Concert Hall of Notre Dame’s DeBartolo Performing Arts Center.

The event is sponsored by more than 10 campus departments and organizations, including the College of Arts and Letters, the Institute for Scholarship in the Liberal Arts and the Center for the Philosophy of Religion, as well as notable campus figures such as Rev. Theodore M. Hesburgh, C.S.C., president emeritus of Notre Dame.

Michael Rea, director of the Center for Philosophy of Religion, said it is only fitting to host a debate of this kind at Notre Dame.

“It is hard to overstate the importance of having conversations like this at a Catholic university – where, in the words of Father Hesburgh, ‘the Catholic Church does its thinking.’

“This debate gives our students the opportunity to confront arguments and rhetoric head-on,” Rea said, “and then discuss the whole experience afterward with Notre Dame faculty – home to some of the world’s leading theologians and philosophers.”

Named one of “America’s most influential conservative thinkers” by the New York Times, D’Souza has been outspoken in his defense of religion, both in print – notably with publication of his bestselling book “What’s So Great about Christianity?” – and in debates against non-believers around the globe.

Ranked by Prospect and Foreign Policy magazines as the fifth most important public intellectual in the world, journalist and author Hitchens has risen to prominence as a leader of the “New Atheist” movement after the runaway success of his book “God Is Not Great: How Religion Poisons Everything.”

D’Souza has described atheism as “the opiate of the morally corrupt,” and Hitchens refers to Christianity as “a wicked cult.” Drawing swords from opposite sides of the issue, the two will explore the cases for and against organized religion, its role in human history and its importance to future generations. Stars of their respective sides, Hitchens and D’Souza have been known to draw numbers usually only seen at sporting events, with 6,000 attending their most recent debate at the University of Central Florida.

Tickets for the event are free to Notre Dame, Saint Mary’s and Holy Cross College students, faculty and staff. Those presenting a valid ID from one of those institutions may obtain one ticket per person from the DeBartolo Performing Arts Center ticket office from noon to 6 p.m. from March 24 to 26 (Wednesday to Friday). On March 27 (Saturday), remaining tickets will be available for purchase to the general public for $10.

For tickets, visit http://performingarts.nd.edu on the Web, call 574-631-2800 or visit the ticket office between noon and 6 p.m. Monday through Saturday.