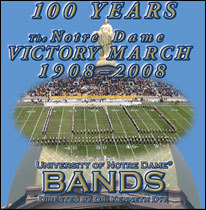 Its probably the most recognized and performed of collegiate songs,said Kenneth Dye, director of bands at Notre Dame.Its inspirational rhythm and tempo create an energy that encourages fans to clap along and enjoy the music.

Some 500 band alumni will join with the current band to Wake up the echoes cheering her name during halftime of the Stanford game Oct. 4 in a Centennial Celebration of the anthem that has proudly been played in all 50 states and 22 countries.

Victory Marchwas written in 1908 by Notre Dame graduates Rev. Michael Shea and his brother John.An organist, Father Shea composed the original tune for the organ, and it premiered, not on the Notre Dame campus, but at the Second Congregational Church in the brothershometown of Holyoke, Mass.

Not until Easter Sunday the year after it was written didVictory Marchfirst Send a volley cheer on high, and Shake down the thunder from the sky at Notre Dame.It was performed at athletic events a decade later.In 1928, then band director Joseph Casasanta arranged the song to sound as we know it today.

Now the most recognizable collegiate fight song in the country,Victory Marchwas ranked No. 1 by former Northern Illinois University professor William Studwell in his bookCollege Fight Songs: An Annotated Anthologyin which he ranks his Top 25.

Although his personal favorite is MichigansThe Victors,Studwell concedes What thothe odds be great or small.Old Notre Dame will win over all. He saidVictory Marchismore borrowed, more famous and, frankly, you just hear it moreAnybody who says that Notre Dames isnt one of the top five songs is out of his gourd. Thats like saying Shakespeare didnt know how to write.

The tune has, in fact, been borrowed by many American high school teams, a handful of Canadian schools and by the Australian Rules Football team Sydney Swans.In 2003, the Celtic punk band Dropkick Murphys released an instrumental version ofVictory March,calledVictory.

All over the world, audiences loveVictory March.On its tour of China in May, the Notre Dame Concert Band played the song to conclude each of its shows, and thousands of Chinese concert-goers spontaneously stood and clapped along every time.Afterward, a few audience members said they already knew the song, but most indicated they simply found it so exciting that they were unable to remain seated.

The significance ofVictory Marchs100th year will be announced at each of the bands pre-game and half-time performances all season, and each band member will wear a commemorative patch and pin.In addition, the band has produced a celebratory book and CD.

The hardcover book100 Years of the Notre Dame Victory March: A Centennial Celebration of the Band of the Fighting Irish Performing the Greatest of All University Fight Songsis a collection of images that features memorable band formations, scenes from the tradition-filled concert on the steps and game day portraits, all of which enjoyedVictory Marchas their soundtrack.

100 Years: The Notre Dame Victory March, 1908-2008is a classic collection of recordings, including the traditional version performed at every home football game, as well as the rendition played by the Concert Band to conclude every program on campus and in tours around the world.The CD also features the original 1908 version performed on the organ along with historic recordings of bands under the direction of Casasanta, H. Lee Hope, Robert OBrien, Luther Snavely and Dye.

Both items are available on the bands website www.ndband.com .

Although we performVictory Marchdozens of times per game, it still rings true to the Irish faithful,Dye said.The lyrical counter-melodies, well crafted bass lines and wonderful melody have stood the test of time.

And forever will spur the Irish Onward to victory.