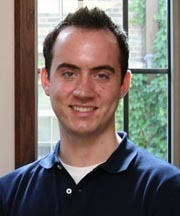 Berger has pursued both his law and undergraduate accounting studies at Notre Dame, but his quest for Double Domer status isnt unusual.More remarkable is the fact that he took the Illinois CPA exam last summer, between college and law school, and scored higher on the rigorous test than anyone else in the state.That feat earned him the Illinois CPA Societys Gold Excel Award in 2008 in addition to the Sells Award.

Some people would have preferred to kick back a little between demanding academic projects, but not Berger.The New Lenox, Ill., native sets goals for himself and goes after themsuccessfully.Even so, he wasnt one of those little kids who presaged a spectacular business career by running the most successful lemonade stand in the neighborhood.

I never did anything particularly entrepreneurial, but there were business stories in the news that sparked my interest when I was in high school,Berger says.The Enron scandal made me realize that accounting was going to be very important in the business world, and that knowing about accounting concepts and terminology would be a great benefit.

This summer, Berger has a chance to explore those concepts in depth.As a research assistant to Professor Matthew Barrettwho also is a CPA and his academic advisorBerger is helping to updateAccounting for Lawyers,which Barrett co-authored.

Its the preeminent textbook as far as legal scholarship in accounting goes,Berger says.The last edition went to press in 2006, so were researching all the new developments of the last two years and writing up summaries and analysis for the supplement, to be published this fall.

After graduation, Berger hopes to do corporate transactional work in Chicago, tapping what he calls Notre Damesgreat alumni networkto find a job in a large law firm.Hes already zeroed in on a goal, of course.Every business transaction has tax implications.Companies want to know how those will impact balance sheets and income statements,Berger says.To be able to bring that additional knowledge, besides awareness of what the legal implications areI think it will bring value to the work I do for my clients in the future.