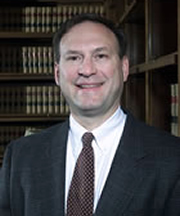 Two members of theNotre DameLawSchoolfaculty who know and have argued cases before Judge Samuel A. Alito Jr., have high praise for the appeals court judge nominated by President Bush for the Supreme Court.

According to John Nagle, John N. Matthews Professor of Law, Alitois a terrific nominee.He has a distinguished record working on constitutional issues in the Justice Department, then serving as the head federal prosecutor inNew Jersey, and for the past 15 years he has developed a reputation as one of the most thoughtful judges in the nation.

We had a number of mutual friends from the Justice Department,Nagle said,so I got to know Judge Alito while I was teaching at Seton Hall just a few blocks away from his courthouse inNew Jersey.He is very gracious, easygoing, and personable.He is also a brilliant legal thinker, but neither in personal conversation nor in his judicial opinions do you get the sense that he is trying to impress people with how smart he is.Nor do you get the sense that he is pursuing a particular agenda.

Actually, I argued a case before Judge Alito before I had the opportunity to meet him,Nagle said,and I still hold him in high regard even though I lost.He ruled that the Postal Service had to obey Pennsylanias water pollution laws in the course of the building of a new postal distribution facility.The legal questions in the case were quite difficult, but Judge Alitos opinion was well reasoned, and it is telling that he came out on the side of the health of theChesapeake Bayand the states ability to protect its own environment.

Richard Garnett, Lilly Endowment Associate Professor of Law, whoargued a case in front of Alito in 1998, praised the judge asan outstanding nomineewhowill be a first-rate justice.He has more judicial experience than any nominee to the court in decades, and a long, distinguished, and diverse record of public service to the law and to the constitution."

Garnett recalled that "my first oral argument, as a newly minted law firm associate, was before Judge Alito in a religious-freedom case.He must have been able to tell that I was inexperienced and nervous, and he was patient and encouraging.

“It is widely known that Judge Alito is not only a careful, engaged and intelligent jurist, but also a decent and respectful judge on the bench,” Garnett said.

While acknowledging that some senators and interest groups would react negatively to the nomination, he insisted that “Judge Alito’s qualifications, record and temperament are impeccable.There is no serious argument that he is not eminently qualified to serve.”