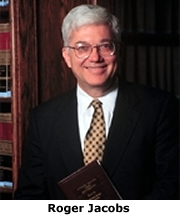 Roger F. Jacobs, associate dean of the University of Notre Dame Law School and director emeritus of the Kresge Law Library, has been awarded the 2007 Marian Gould Gallagher Distinguished Service Award from the American Association of Law Libraries (AALL).

Jacobs will receive the award, which was established in 1984 to recognize outstanding service to the AALL and law librarianship in general as well as for contributions to the professional literature, at the closing banquet of the AALLs annual meeting inNew Orleanson July 17.

Jacobs joined the Notre Dame faculty as director of the Kresge Law Library and professor of law in 1985, after serving from 1978 to 1985 as the librarian of the United States Supreme Court.He has served as associate dean since 1990.

Jacobsscholarship includes legal research and writing, and he regularly gives lectures and presentations to other library professionals as an active member of numerous professional organizations.

The only person to have served as president of both the Canadian Association of Law Libraries and the AALL, Jacobs oversaw a five-fold increase in the size of theKresge Law Library collection during his tenure as its director.Among the awards he has received from Notre Dame are the 2000 Presidential Award for Outstanding Service to the University and the 2001 Glenville Clark Award, which honors members of the Notre Dame community whose voluntary activities and public service advance the cause of peace and human rights.