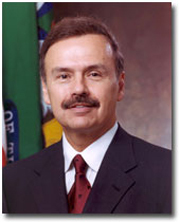 Notre Dame Law School Professor Jimmy Gurulé is in The Hague, Netherlands, this week with nine other legal experts at the Conference on Rule of Law in Iraq.p. The conference will provide training for some 20 Iraqi judges who will comprise a tribunal to determine legal charges against Saddam Hussein and other members of Iraqs overthrown Ba’athist government and eventually to try them.p. Gurulé will conduct a conference workshop on judicial ethics and legal ethics. Other members of the international training team, which includes U.S. Supreme Court Justices Anthony M. Kennedy and Sandra Day O’Connor, will address such topics as the role of the judiciary in building constitutionalism, the role of judges as fact-finders, the role of prosecutors, and transitional justice.p. Gurulé, who joined the Notre Dame law faculty in 1989, is a prominent scholar of international criminal law, terrorism, terrorist financing, and anti-money laundering. He has served in several public law enforcement positions, including as U.S. Treasury under secretary for enforcement, where he oversaw the Secret Service, the Customs Service, the Financial Crimes Enforcement Network, the Office of Foreign Assets Control, the Federal Law Enforcement Training Center, and the Bureau of Alcohol, Tobacco, and Firearms.p.