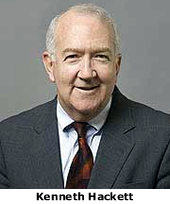 Diploma ceremonies forNotre DameLawSchoolstudents and Mendoza College of Business masters degree candidates will be conducted May 20 (Sunday) at the reflecting pool of the Hesburgh Library on campus. (In case of rain, the ceremonies will be held in theStepanCenter.)

The Mendoza College of Business will present diplomas to 419 masters degree candidates at9 a.m.Kenneth Hackett, president of Catholic Relief Services (CRS), and honorary doctor of humanities degree recipient, will address the assembly.

After graduating fromBostonCollegein 1968, Hackett, who has spent his entire career in service to the poor and disenfranchised worldwide, joined the Peace Corps and was assigned toGhana. He began working with CRS in 1972, starting his career inSierra Leone. Since then he has served as regional director forAfrica, director of external affairs, country representative to thePhilippines, and regional director ofEast Africa. He was appointed executive director of CRS in 1993 and president in 2003.

Two hundred six students will be recognized at the Law Schools diploma ceremony at 4:30 p.m. A prayer service and hooding ceremony will be held at 10 a.m. in the Basilica of the Sacred Heart forLawSchoolgraduates, their families and friends.