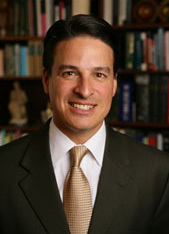 As one of just seven elected members of the Inter-American Commission on Human Rights (IACHR), Paolo Carozza takes both a birds eye view of and boots-on-the-ground approach to international human rights law.

Carozza, associate professor of law at Notre Dame, is midway through his four-year term with the commission, which promotes the observance and defense of human rights for 35 nations in the Western hemisphere.

Its been a busy two years. The commission currently is processing more than 800 cases brought by individuals or non-governmental organizations alleging human rights violations.

The IACHR recently heard a case involving people accused of a crime in Uruguay who were held in preventive detentionwithout formal charges and without trialfor five years,Carozza said.We issued a judgment saying it is a violation of the presumption of innocence, among other things, to hold these men in preventive detention. They were released, and are now awaiting trial.

On behalf of the commission, Carozza has a particular responsibility for the rights of indigenous people, such as the destitute Paraguayans who have lost their ancestral land to their government. He and the commission also have decided cases involving massacres in Peru that currently are central to the criminal proceedings there againstformer President Alberto Fujimori on highly publicized charges of crimes against humanity.A lot of the cases brought before the commission result in payment of compensation to the aggrieved parties or even changes in domestic law and governmental policy,Carozza said.In some cases, our recommendations help governments take positive actions to ensure human rights in their countries.

The commissions decisions enjoy a great deal of credibility, especially in Central and South American countries where it has played an important role in opposing dictatorships and abusive regimes in the past.The next session of the commission begins in early March.