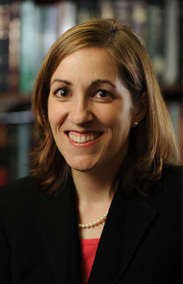 Patricia Bellia, professor of law and Notre Dame Presidential Fellow in the Notre Dame Law School, has been appointed chair of the University’s Faculty Board on Athletics and its NCAA faculty athletics representative, by Rev. John I. Jenkins, C.S.C., Notre Dame’s president. Her appointment is effective Aug. 1.

“As a member of the Faculty Board on Athletics since 2005, and as a former student-athlete herself, Tricia knows firsthand the challenges associated with the difficult but achievable goal of maintaining both academic and athletic excellence at Notre Dame,” Father Jenkins said. “I appreciate her willingness to take on this assignment and look forward to working closely with her and the rest of the board.”

Bellia succeeds Don Pope-Davis, vice president and associate provost, who served as chair for the past three years.

Before attending the Yale Law School, she worked at the Carnegie Endowment for International Peace, serving as an editor for Foreign Policy magazine and co-authoring a book on self-determination movements. At Yale, she served as editor-in-chief of the Yale Law Journal, executive editor of the Yale Journal of International Law, and student director of the Immigration Legal Services Clinic.

Upon graduation in 1995, Bellia clerked for Judge José A. Cabranes of the United States Court of Appeals for the Second Circuit and Associate Justice Sandra Day O’Connor of the Supreme Court of the United States. Before joining the Notre Dame faculty, she worked for three years as an attorney-advisor in the Office of Legal Counsel of the U.S. Department of Justice.

The Faculty Board on Athletics serves as the principal advisory group to Notre Dame’s president on educational issues related to athletics. The board is composed of 15 members: seven elected from the University’s teaching and research faculty; four appointed by the president (three from the teaching and research faculty and one from the student body); and four ex officio members – the vice president for student affairs, the director of athletics, the director of academic services for student-athletes, and a representative from the president’s office.

The board’s principal purpose is to foster the University’s commitment to academic integrity in athletics and to ensure that the athletic program operates in consonance with the University’s educational mission. It also serves as a formal liaison between the faculty and athletic department. Among its activities, the board monitors data on the admission of student-athletes and their academic performance, progress toward degrees, and graduation rates. It also assesses the effectiveness of institutional support for student-athletes. The board approves or declines all petitions for fifth years of eligibility.

The board’s activities closely match the responsibilities of the NCAA faculty representative, who also is expected to advise the president, uphold academic integrity and student welfare, and serve as the liaison to the institution’s faculty. The faculty representative also functions as a principal link between the institution and the NCAA in matters of eligibility, certification and compliance with NCAA regulations.