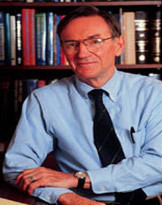 Rowman&Littlefield recently published the second edition of a law textbook whose co-author is Donald P. Kommers, Joseph and Elizabeth Robbie Professor of Political Science and Professor of Law at the University of Notre Dame.p. “American Constitutional Law: Essays, Cases and Comparative Notes,” a two-volume comprehensive textbook on constitutional law and civil liberties, draws on the liberal arts traditions and disciplines to examine the facts and rulings of the major Supreme Court cases and relate them to issues of political theory. While primarily concerned with U.S. law, the authors invite the books readers to assess the values enshrined in that law in light of other legal systems and understandings of governance.p. New features in the second edition include a chapter on the Supreme Court and elections, which discusses the controversial presidential election of 2000; case studies of 2003 Supreme Court decisions on affirmative action and sodomy laws; and analysis of the Patriot Act and other efforts to combat terrorism in the United States and abroad.p. The first edition of “American Constitutional Law” was praised by Theodore M. Vestal of Oklahoma State University as “the Cadillac of casebooks for undergraduate classes.”p. Kommersco-authors are John E. Finn, professor of government at Wesleyan University and Gary J. Jacobsohn, Patterson-Banister Professor of Government at the University of Texas.p. _Contact: Professor Kommers at 574 631-6304 or Kommers.1@nd.edu _ p.