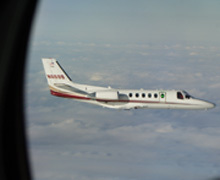 The University of Notre Dame’s Institute for Flow Physics and Control’s Aero-Optics project recently conducted two flight tests of a laser system aimed at, among other things, developing communication capabilities for airplanes in flight.

The flights demonstrated that the system does not interfere with the plane’s ability to fly and that a laser from one plane in flight, using a tracking mechanism, can be held at a fixed point on another plane in flight.

More test flights will begin in the spring, after more wind tunnel tests, according to Mike Zenk, operations manager for the project that started in August 2007 with a five-year, $5.6-million grant from the Air Force. Eric Jumper, a Notre Dame professor of aerospace and mechanical engineering, is the lead investigator.

The project leases flight time on Cessna Citations from Northern Air of Grand Rapids for the tests.

“We’re spending about $5,000 an hour for two planes to do this work,” Zenk says. “The Air Force could spend more than $100 million for one test flight. We’re saving the government a lot of money by doing all this testing work. We are also helping to move the technology forward.”

After extensive computer modeling and wind tunnel testing across more than two years, the group developed a turret that attaches to the side of an airplane in order to receive the laser sent from another plane.

The first flight test checked the effect of the turret, a 12-inch-diameter hemisphere on a cylinder, on the plane’s ability to fly.

“That went very well,” Zenk says. “We had no problem with the airplane flying. We’ve eliminated a lot of the risks of the program by proving that the airplane flies well with the turret ‘attached’ to the side.”

The second test flight, with two planes, demonstrated that the laser tracking mechanism can lock the laser onto a desired point on another plane in flight.

The research, in collaboration with the Air Force Institute of Technology, which made the laser system, and Boeing, which built the turret hardware, involves extensive tests of how turbulence affects laser energy. Varying air densities can refract lasers like prisms refract sunlight.

“We have a lot more wind tunnel testing to go and obviously a lot more airplane testing,” Zenk says. “Later this spring we will be able to accomplish the next big step for the research effort by installing and flying the complete system on both airplanes.

The project is saving millions of dollars compared to the military’s doing the same thing with more sophisticated equipment. Notre Dame will have the capability to test other things on these airplanes, too, and there are very few universities in the country that have flight test capability.