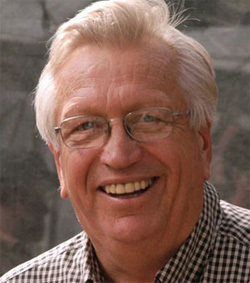 Wes Jackson, president of the Land Institute, will be the inaugural Lecturer in Sustainability at 7 p.m. on March 28 (Wednesday) in Room 101 of the Jordan Hall of Science at the University of Notre Dame.

His lecture, titled “Why Agriculture Must Take the Lead Toward a Sustainable Future,” is free and open to the public.

The Land Institute has worked for more than 30 years on the problem of agriculture. Its purpose is to deliver an agricultural system with the ecological stability of the prairie and a grain yield comparable to that from annual crops. The institute’s research is focused on agricultural practices that combine earth-conscious farming with new plant breeds and genetic technology and its work may hold solutions for climate change and other global challenges of vital importance for agricultural states such as Indiana.

Jackson earned a bachelor’s degree from Kansas Wesleyan, a master’s degree from the University of Kansas and a doctorate from North Carolina State University. He established and served as chair of one of the country’s first environmental studies programs at California State University, Sacramento, then returned to his native Kansas to found the Land Institute in 1976.

Jackson is the author of several books, including “New Roots for Agriculture” and “Becoming Native to This Place,” and is widely recognized as a leader in the international movement for a more sustainable agriculture. He was a 1990 Pew Conservation Scholar, became a MacArthur Fellow in 1992 and received Right Livelihood Award in 2000. In 2005, Smithsonian magazine called him one of “35 Who Made a Difference.”

Jackson has been featured in popular media including The Atlantic Monthly, National Geographic, Time Magazine and NPR’s “All Things Considered.”