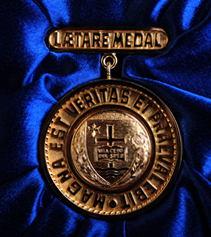 “Sisters Gallagher and Harrington and Father McCarthy have summoned the Church to a crucial and too often overlooked ministry,” said Notre Dame’s president, Rev. John I. Jenkins, C.S.C. “Insisting that a developmental disability neither tempers Christ’s invitation nor restricts one’s right to respond, they have ushered countless people to their rightful place at the Eucharistic table.”

SPRED’s ministry began in 1960, when Father McCarthy, a priest of the Archdiocese of Chicago, began working with parents, special educators and catechist volunteers of several archdiocesan parishes to make Catholic liturgies and catechesis more accessible to children and adult parishioners with developmental disabilities. Sister Harrington, a member of the Society of Helpers, joined him in 1963 to help with catechetical and administrative work, and Sister Gallagher, a member of the Sisters of Providence, joined them in 1967, assisting both with administration and the training of new special catechists.

Energized by the renewed emphasis on catechesis in the wake of the Second Vatican Council, SPRED’s ministry expanded beyond Chicago in the 1960s and now the 52-year-old network administers faith formation and sacramental initiation programs for people with special needs in 28 Catholic dioceses and 200 parishes nationwide (including in Notre Dame’s own diocese of Fort Wayne/South Bend) as well as small faith groups in several other countries including England, Ireland, Scotland, Australia, South Africa, Malta and Mexico.

According to its mission statement, SPRED’s work is premised on a belief that “the Church, the Sacraments and the Love of God are here for all of us. Every man, woman and child has a right to come into the Church and live its liturgy, experience its rich history and traditions, and feel the presence of God in their lives. It is our obligation as Christians to help as we can to make that right a reality for those with physical, mental, emotional and intellectual challenges.”

The Laetare (pronounced Lay-tah-ray) Medal is so named because its recipient is announced each year in celebration of Laetare Sunday, the fourth Sunday in Lent on the Church calendar. “Laetare,” the Latin word for “rejoice,” is the first word in the entrance antiphon of the Mass that Sunday, which ritually anticipates the celebration of Easter. The medal bears the Latin inscription, “Magna est veritas et prevalebit” (“Truth is mighty, and it shall prevail”).