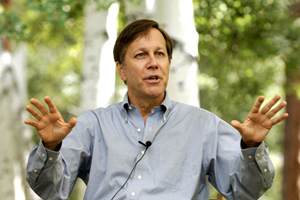 Dana Gioia, poet and former chairman of the National Endowment for the Arts, will receive the University of Notre Dame’s 2010 Laetare Medal. He will be awarded the medal, the oldest and most prestigious honor given to American Catholics, during Notre Dame’s 165th University Commencement Ceremony on May 16 (Sunday).

“In his vocation as poet and avocation as arts administrator, Dana Gioia has given vivid witness to the mutual flourishing of faith and culture,” said Notre Dame’s president, Rev. John I. Jenkins, C.S.C. “By awarding him our University’s highest honor we hope both to celebrate and participate in that witness.”

A native of Hawthorne, Calif., Michael Dana Gioia was educated in Catholic elementary and secondary schools before, as he has joked, he “traded down” for Stanford University, from which he was graduated in 1973, and Harvard University, from which he earned a master’s degree in comparative literature in 1975, studying with the classical translator Robert Fitzgerald and the poet Elizabeth Bishop. He returned to Stanford to earn a master’s of business administration degree in 1977.

Even while pursuing a business career from 1977 to 1992 with the General Foods Corp. in New York, where he served as vice president of marketing, Gioia wrote and published widely. He also served as poetry and literary editor for numerous magazines and won recognition for his own poems, including the Frederick Bock Award for Poetry in 1986 and the 1992 Poet’s Prize. He left General Foods in 1992 to begin writing full time.

Gioia has published three full collections of poetry, including “Interrogations at Noon,” which won the 2002 American Book Award. He also has published eight smaller collections of poems, two opera libretti and numerous translations of Latin, Italian and German poetry. In addition to editing more than 20 literary anthologies, he also writes essays and reviews in such magazines as The New Yorker, the Atlantic, the Washington Post Book World, the New York Times Book Review and Slate. His 1992 volume “Can Poetry Matter?” – which was widely discussed in both the United States and abroad – often is credited with helping revitalize the place of poetry in American public life.

From 2003 to 2009, Gioia served for two terms as chairman of the National Endowment for the Arts. He is credited with revitalizing an agency through which he sought to strengthen bipartisan support for public funding of arts and arts education, to champion jazz as a uniquely American art form, to promote Shakespeare readings and performances nationwide, and to distribute NEA grants more widely.

In a lecture in 2000, Gioia argued that art and Catholicism mutually flourish because “the Catholic, literally from birth, when he or she is baptized, is raised in a culture that understands symbols and signs. And it also trains you in understanding the relationship between the visible and the invisible. Consequently, allegory finds its greatest realization in Catholic artists like Dante.”

Gioia divides his time between Sonoma County in northern California and Washington, D.C., where he is a parishioner at the Shrine of the Blessed Sacrament.

The Laetare (pronounced Lay-tah-ray) Medal is so named because its recipient is announced each year in celebration of Laetare Sunday, the fourth Sunday in Lent on the Church calendar. “Laetare,” the Latin word for “rejoice,” is the first word in the entrance antiphon of the Mass that Sunday, which ritually anticipates the celebration of Easter. The medal bears the Latin inscription, “Magna est veritas et prevalebit” (“Truth is mighty, and it shall prevail.”)

Gioia is the second poet to be awarded the Laetare Medal, following 1964 recipient Phyllis McGinley.

More information on Gioia is available on his Web site at http://www.danagioia.net/.