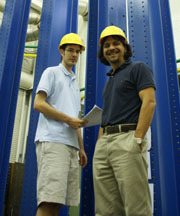 Seismic disturbances are common and often fatal in YahyaGinoKuramas native Turkey, and several occurred during his early childhood, including the 1970 quake in Gediz that killed 1,100 and displaced thousands.

Kurama, an associate professor of civil engineering and geological sciences at the University of Notre Dame, remembers the aftermath of a quake that hit a year later near his childhood home in the eastern town of Bingol. It ultimately killed more than 750 and left his family living in tents while relatives from Istanbul braved the threat of aftershocks to bring them food and clothing.

Key in that incident was the visible evidence that some structures survive a quake while others do not. Because his father was a government physician, Kuramas family lived in well-designed concrete-block housing. They had to evacuate, but the building stood.

Many buildings around us collapsed,he recalls.

By 1999, Kurama already had finished a civil engineering doctorate at Lehigh University, where he specialized in concrete structures, and had joined the Notre Dame faculty. When the Izmit earthquake hit that August, he went home to study its impact. While there, he examined how well some family membershomes had held up. He advised a move.

If you look at economics, earthquakes are not at the top of the list in terms of destruction. Hurricanes are far worse. The scary thing is, if you look at lives lost, nothing compares to earthquakes,he says.

Earthquakes happen without warning.The only way to put significant resources into saving lives is [through proper] construction of buildings.

Kurama has not been pursuing research in earthquakes because of his past, but there seems a bit of kismet involved in a unique research partnership he has recently undertaken with the Charles Pankow Foundation and the Precast/Prestressed Concrete Institute. The partnership aims to develop economical prefabricated buildings that can safely withstand severe earthquakes with little damage.

Engineers have clear ideas of building techniques that will withstand the impact of earthquakes, such as reinforced concrete and steel framing systems. However, most of these proven techniques are prone to heavy damage during an earthquake; the advantage of a precast concrete system is that it can provide a damage-free and economical solution while also speeding construction.

Prefabricated structures are not common in areas where earthquakes frequently hit. Thats where Kurama, who directs the Concrete Structures Laboratory, and graduate student Brian J. Smith come in. They are investigating a new class of structure, using a hybrid of prestressing and reinforcing steel, and will test the products viability in a Fitzpatrick Hall laboratory where the motion of an earthquake can be simulated with hydraulic actuators.

Stronger steel structures or heavier concrete foundations will not, themselves, provide the best solution.

Its all in the detail,according to Kurama.Bigger and stronger is not necessarily better.

The beauty of the partnership with the construction industry is that its professionals want to see the project in the field. While new earthquake-resistant structural concepts will be forged here on campus, Kurama says the work will only be completewhen I see the first building constructed.