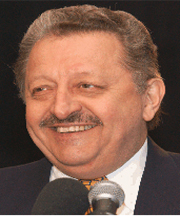 Marco Trbovich, director of labor policy for Sen. John Kerrys presidential campaign, will deliver a lecture titledThe Power of Labor in Presidential Politicsat 8 p.m. Sept. 29 (Wednesday) in Room C-100 of the Hesburgh Center for International Studies at the University of Notre Dame.p. Sponsored by Notre Dames Higgins Labor Research Center as part of the McBride Lecture series, the talk is free and open to the public.p. Trbovich is on leave from the United Steelworkers of America (USWA), where he serves as an assistant to Leo W. Gerard, international president of the organization. A graduate of Indiana University, Trbovich previously worked as a journalist for United Press International and the Detroit Free Press. He also served as director of the Massachusetts Port Authority and as assistant director of transportation and development for a White House task force on youth employment. Before joining the USWA, Trbovich was a communications consultant, organizing campaigns in both the public and private sectors.p. The USWA represents approximately 1 million workers and retirees in North America and is dedicated to advancing the health and welfare of workers and their families through organizing, collective bargaining and political action.p. Established in 1977 by the USWAto better understand the principles of unionism and our economy,the McBride Lecture honors the fourth international president of the union, Lloyd McBride, who served from 1977 to 1983. The series was initiated in 1978 to give recognition to the work of a pioneer of the USWA, Joseph P. Molony, who served as vice president from 1965 to 1973. The invited speakers represent various aspects of journalism and the labor movement.p. _Contact: Anne Zakas, Higgins Center, 574-631-6934, zakas.1@nd.edu _ p. p.