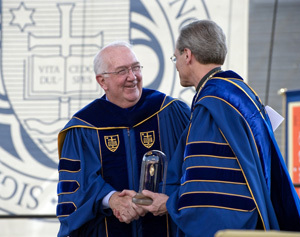 Thank you, Father Jenkins, this is a great and special honor. To be classed in the elite ranks of other Massachusetts notables such as John F. Kennedy, Tip O’Neil, and my friend and counselor Father J. Bryan Hehir, and to be listed next to Dorothy Day, Sister Helen Prejean, and your own Father Ted Hesburgh is truly humbling. And it is also appreciated that your list of Boston College graduate awardees is growing. That’s most commendable.

As has been mentioned, the Latin word Laetare means to rejoice.

My 40 years with CRS have given me ample chances to rejoice. I have witnessed diseases eradicated, economic change benefitting millions, malnutrition levels drop precipitously in many communities, information and communication technologies transforming the environment for the poor, and peaceful (and often not so peaceful) transitions to independence in states around the world. I want to tell you about one success in which I participated rather directly.

Last July I had the distinct privilege to be part of the U.S. delegation to the Independence celebrations for the world’s newest nation, the Republic of South Sudan. The struggles of the people of South Sudan have figured actively into my life over the last four decades. I have witnessed the bombing of villages in the Nuba Mountains and the total destruction of towns and villages. I have spent nights in discussion of U.S. foreign policy with South Sudan military commanders, evening dinners with parish priests who told me more about CRS’s history in South Sudan than I ever knew, and I saw and heard the pain of people whose families were torn apart by decades of war.

Freedom, liberty and independence came as a result of the struggle and pain those people endured. Not a person in the Independence Day crowd of over 100,000 people was without the torment of personal family loss from the previous 40 years of struggle. It was an exceptionally moving experience to stand there in the crowd in Juba as hundreds of thousand, young and old, rejoiced that they had attained their liberty. They knew the cost of the freedoms that they struggled to gain for so long.

I took particular pride that I was able to represent our government, our Church, the efforts of so many from CRS who stood with the people of South Sudan for decades. It was a moment to stand with Archbishop Paulino Lukudu Loro, the Archbishop of Juba, as he attended the ceremony to represent a local Church that had been in the forefront of the drive toward the Comprehensive Peace Accord that led to the referendum for independence. He, his fellow Bishops and so many others in the Catholic and Anglican Church turned their faith into action during the struggle as so many other religious leaders have done in East Timor, South Africa, Kosovo and many other struggles for liberty, freedom and independence across the globe.

And I took pride that I was able to represent you the student body, as well as the faculty and staff of this great University, for the remarkable demonstration of solidarity you displayed in 2010 for the people of South Sudan.

Parents, you may not know about this, but there were many efforts that led to that day of celebration in Juba. Those efforts took place in South Sudan; they took place in Washington, at the United Nations and many capitols around the world. And one of those efforts took place on this campus. What you here at Notre Dame did in 2010 in opening your arms to the beleaguered visiting bishops of Sudan who came to appeal for America’s concern and attention to a crisis in a forgotten part of the world was special. And you heeded their call to action.

CRS and the US bishops’ conference brought Sudanese bishops to the United States to bring attention to the crisis. We chose Notre Dame for the one of the public events. Following the Bishop’s visit to campus, the Notre Dame community — from Father Ted, to coaches, like Mike Brey and the basketball team and Kevin Corrigan and the lacrosse team, to student body president Patrick McCormick, all rallied the athletes, students, faculty, staff, as well as clergy and community members — to come together as a university and publicly advocate to the highest levels of our government for a peaceful referendum process. Through numerous campus events, prayers, petitions and an incredible Playing for Peace rally, your community stood together with one clear voice in support of peace in Sudan.

You sparked an energy that inspired campuses across the country. That spark had an impact on our own government and the attention it gave to the cause of a peaceful transition to independence in South Sudan. I was told by an individual in the White House that the visit of those Sudan Bishops following their enervating experience here on campus was a “game changer.”

Now as you move into a new phase of your life, as you hopefully find a job, pursue graduate study (hopefully not have to move back to you parents house), I hope you will remember what you did for those people thousands of miles away. You helped them attain their political freedom, the freedom to be who they want to be, to practice their religion as they decide to practice it, to have the liberty to make their own decisions.

Today, I would like to leave you graduates with an encouragement as you step off this campus into a different world than exists here in South Bend. You will be successful, and hopefully you will have much joy in the attainment of your success. After four or more years here, I believe it is safe to say you have a broader concern for others, particularly those less fortunate here and around the world. But I would like you to remember what you contributed to in the peaceful transition to independence in South Sudan. You helped people who fought hard and suffered, and sometimes died for liberties.

You have also come to understand and appreciate the value of involvement in service to others and the promotion of a just society. Your time here at Notre Dame has blessed you with both a great education, as well as a profound and enriching experience.

Domers, go out there remembering what you did for the people of South Sudan and change the world for the better.