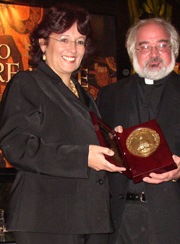 Peruvian human rights advocate Sofia Macher received the 2004 Notre Dame Prize for Distinguished Public Service in Latin America in a ceremony June 23 in Lima.p. A leading force in her country’s arduous efforts to emerge from authoritarian rule, Macher issued a call for citizen involvement in her acceptance speech.p. This prize, and the graciousness of the organizers to present it in Peru, is an opportunity to invoke the vocation for public service  so that we all accept the burden of the profound changes needed by our country,she said.p. Scholars from Notre Dames Kellogg Institute, which administers the award, were joined at the ceremony by experts from Perus policymaking community, journalists, business executives, Notre Dame alumni, priests of the Congregation of Holy Cross, and young people from the countrys poorest region. Rev. James McDonald, C.S.C., Latin American affairs advisor to Notre Dames president, Rev. Edward A. Malloy, C.S.C., presented the fifth annual prize to Macher on behalf of Father Malloy and the University.p. The award, which is supported by funding from The Coca-Cola Foundation, celebrated a number of accomplishments by Macher, who is the first woman to receive the Notre Dame Prize.p. She dedicated a quarter century of her professional life to civil society and its non-governmental organizations. In various posts, she focused on food and health care for thousands of indigent residents of Lima, served as national chair for Amnesty International, assisted a financial organization that helped women set up small businesses, and became the voice of the Peruvian human rights movement during a period of political violence in the late 1990s.p. When a new regime replaced authoritarian rule in 2001 and Peru, with much assistance from Macher, established a Truth and Reconciliation Commission, she was named to the commission, and she played a vital role in arranging the public hearings. Since the commission concluded its task, she has worked with the Institute for Legal Defense, where she oversees civil society efforts to ensure that the Peruvian government will implement the commissions recommendations and bring those responsible for human rights abuses to trial.p. As we know from research on development and democracy, the role of women in economic production, in civic movements and in democracy is fundamental,Father McDonald said.Civil society, we now understand through research on the most recent wave of democratization in Latin America, plays an essential role in achieving a successful transition to democracy.p. Macher will come to Notre Dame in the fall to conduct research at the Center for Civil and Human Rights at the Notre Dame Law School.p.