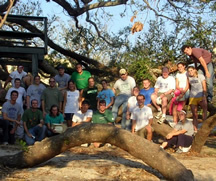 Several dozen Notre Dame students devoted their fall break (Oct. 16 to 22) to helping rebuild sections of theGulfCoastthat were devastated by Hurricane Katrina.Now, one group that traveled toBiloxi,Miss., tells of the massive extent of the damage and their myriad emotions while trying to make a dent in restoration.

The troupe, divided into four smaller groups, spent long days laboring at various Catholic schools inBiloxi.The most memorable part of the trip for Eckstein was her visit toMercyCrossHigh School, where the students and faculty have been relocated to another building until it can be determined whether their school can be salvaged and, if so, how long it will take.

Everything in the demolished school seemed to be just as it was right after Katrina hit,she said.The floor was caked with mud, lockers were overturned and books were scattered about, as the two-story school had been mostly under water.Just by being in the building I got a haunting sense of the power of the storm, not only in its ability to destroy buildings, but also in how it changed lives.

Priorities for restoration havent entirely been what one might expect.With a massive amount of work looming at Mercy Cross, clean-up crews have first made sure the kids have somewhere to play basketball in the midst of all the turmoil.The gymnasium has been cleaned and the floor refinished because the studentstemporary school does not have a gym.

Eckstein also spent time atResurrectionHigh School, which another Notre Dame group from Stanford Hall helped to paint.There, she and her fellow refurbishers turned an empty space into a computer room with Internet access, thanks mostly to donated equipment as well as a few monitors that survived the storm.Their tasks also included building desks, chairs and shelves and ripping up tile flooring from a St. Vincent de Paul building on the schools campus, formerly a thrift store which donated proceeds to help pay heating costs for needy families.

Stories like this, and so many more, according to Eckstein, are plentiful.

The thing that I will take away from this trip is that the people are changed forever, but not defeated,she said.Life is going on.Ive never seen anything like what I saw inBiloxi, and my initial emotions were sadness and guilt.But when you talk to the people and see how the whole community is involved in rebuilding, its impossible not to sense the presence of God.