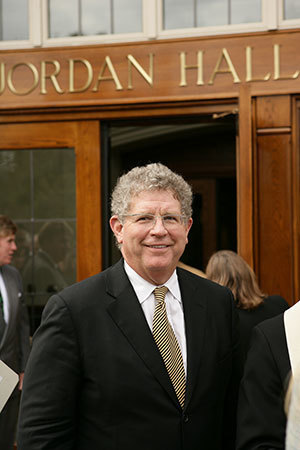 A $75 million gift from University of Notre Dame alumnus and Trustee John W. “Jay” Jordan is the largest in the University’s history and makes him its most generous benefactor, with a giving total of $150 million.

Jordan’s latest gift, announced Friday (May 2) during the University’s spring Board of Trustees meeting, will be directed toward the creation of a world-class research program in an area of science and technology that is new to Notre Dame and that has the potential to create innovative intellectual property that has important commercial potential. The funds can be used to recruit top faculty and students, provide laboratory supplies and equipment, support seed grants, create prototypes, and in other ways build and sustain a truly exceptional research and commercialization program.

“Words cannot begin to express our deep appreciation for a gift of truly historic proportions,” said Rev. John I. Jenkins, C.S.C., Notre Dame’s president. “Jay has given of his time, talent and treasure for many years, and this is the latest example of his extraordinary generosity on every level. We have been and continue to be transformed by his unwavering support of his alma mater.”

Thomas G. Burish, the University’s provost, added: “Jay has often suggested that the future of research and innovation in this country and beyond is in the marriage of technology and science, and has encouraged Notre Dame to be aggressive in building programs in this area. Once again, Jay has generously supported what he has encouraged, and has done so at the highest level, consistent with his bold vision and expectations. It is but one more example of how Jay has helped Notre Dame become a better university.”

A Chicago business leader, Jordan was graduated from Notre Dame in 1969 and has served on its Board since 1993. His previous gifts to the University include $30 million for the Jordan Hall of Science, $40 million for as yet undesignated purposes, and funding for the Jordan Auditorium in the Mendoza College of Business, for The Malpass Scholars Program (which includes a challenge grant) and for numerous scholarships, fellowships and grants for the business college, athletics and the Alliance for Catholic Education. He received an honorary degree from the University in 2001.

“Although I am not very knowledgeable in the technology sector, I know how important it is for our country to maintain leadership in state-of-the-art technology,” Jordan said. “It is not only critical for socioeconomic reasons, but national security as well. I have always thought that you cannot invest too much in technology. Hopefully this gift to Notre Dame will elevate our leadership role in these areas and will have a global impact.”

“Jay Jordan has had an impact on Notre Dame far beyond this latest act of generosity,” said Scott Malpass, the University’s vice president and chief investment officer. “His transformational leadership of the Trustees’ Investment Committee has helped us grow the Notre Dame endowment from just under $1 billion to $9 billion today, providing significant new resources for our students and faculty in every aspect of University life.

“In his career as a pioneer in the private equity business, he set the standard for the industry, and he has brought that spirit of innovation and investment discipline to his leadership of our Investment Committee. I have been blessed to work with Jay for almost 20 years in managing our Endowment Fund, and we would not be where we are today without his leadership.”

Jordan is a co-founder of The Jordan Company, a private investment firm that acquires, manages and builds companies for the The Jordan Company’s partnership account. He formed the Chicago-based holding company Jordan Industries Inc. in 1988 and serves as its chair and chief executive officer.

Jordan’s philanthropic activities include the establishment of the Jordan Family Sports Foundation, which provides funding for underprivileged youths to participate in athletic activities. He serves on the boards of the Lyric Opera of Chicago, the Art Institute of Chicago and more than 20 other corporate and/or charitable organizations.

Two of Jordan’s children are graduates of Notre Dame. John W. Jordan III was a scholarship football player for the Irish and earned a finance degree in 2001, and Jennifer Jordan received a degree in film, television and theater in 2003.