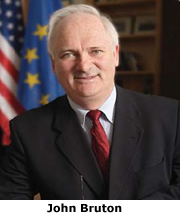 John Bruton, European Union (EU) ambassador to theUnited Statesand former taoiseach (prime minister) ofIreland, will discuss the expansion of the EU in a lecture at 4:30 p.m. March 22 (Thursday) in the Jordan Auditorium of the Mendoza College of Business at the University of Notre Dame.

TitledThe Future of Economic and Political Relations Between the European Union and theUnited States,Brutons address is sponsored by the Nanovic Institute for European Studies and Mendoza. The lecture and an ensuing reception are free and open to the public.

In addition to his public appearance, Bruton will deliver a lecture titledEU-U.S. University Relations: Opportunities for Partnershipduring a luncheon with Notre Dame students and faculty March 22. His visit also will include a meeting with local business and civic leaders March 23 to discuss the importance of the relationship between the EU and the United States in matters of trade, counter-terrorism, public health, energy, the environment, and the promotion of peace, democracy and human rights around the world.

Bruton is credited with transformingIrelands economy into theCeltic Tiger,a reference to its rapid growth, during his time as taoiseach from 1994 to 1997. In 1993 the Irish economy grew by 2.7 percent; it grew an average of 8.7 percent annually during Brutons term.

Bruton was elected leader of the Fine Gael party in 1990 and became the ninth taoiseach of theRepublicofIrelandwhen his party gained control in 1994. While prime minister, he was deeply involved in the Northern Ireland peace process that ultimately led to the 1998 Good Friday Agreement. Bruton presided over the Irish EU Presidency in 1996 and helped finalize the Stability and Growth Pact to govern management of the Euro as the single European currency.

His 35 years of service in Irish domestic politics concluded in 2004 when Bruton was appointed EU Commission Head of Delegation in theUnited States. As ambassador, Bruton has met with President Bush, members of Congress and governors to outline EU developments. He also has visited community leaders and students in some 20U.S.states to explain how an expanding EU is good for the American economy.