Father Jenkins, Vice President Biden, graduates … It’s truly an honor and a privilege for me to be here with all of you today — just a regular guy who used to have a big job.

It’s been six months now since I left public service. That’s given me a little time to reflect. 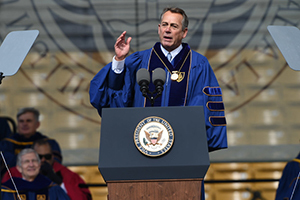 And something occurred to me a few months ago about the nature of the difficult task of what we call governing: Governing is the art of the possible. Politicians these days are constantly being pushed to promise the impossible. And this being a presidential election year, you’ve been hearing a lot of impossible promises.

As Speaker, I always drew a distinction between “compromise” and “common ground,” because I truly do believe they are different things, and the fact of the matter is, you can find common ground with the other side without compromising on your core beliefs. Ladies and gentlemen, Vice President Joe Biden is one of those people.

Joe and I had many disagreements on many different issues. But you know I learned the art of being able to disagree without being disagreeable growing up in my dad’s bar. But even as we’ve both disagreed, we’ve both always understood the need to keep looking for things we could agree on. Because, while I’m a Republican, and Joe’s a Democrat, the fact is that first, we’re both Americans.

Mr. Vice President, it is an honor to share the stage today. I was thinking about what I was going to say this morning and I decided that, you know, the speech that I have is not really the speech that I wanted to give.

When I was sitting in these seats out here like you over 40 years ago, I could never have imagined that I would have spent some 34 years in public service. Never could have imagined what path in life I would take. And so I began to think about what’s really important, and I know a lot of you are thinking about “what am I going to do? What am I going to do?” … Let me tell you something. You can think about that tomorrow, you can think about it next week and frankly you can think about it next year. But what you can think about right here, right now is who do you want to be. You know I played football for a guy named Gerry Faust at Moeller High School. He came up here and didn’t win as many games as he’d like to have won as your head coach. But I learned a lot of things from Gerry Faust. Yes, I learned a lot of things about playing football, but I said more Hail Marys in high school than I’ll say for the rest of my life — and I say some every day. But when I look back on my life, Gerry Faust, I’m a high school guy. Taught us how to be men, taught us how to be leaders. Taught us what was required of us.

Another good friend: Lou Holtz. He won a lot of games here including the national championship. You’ve never met a man that was more optimistic, more hard-charging, but always with a smile on his face.

There was another person who impacted my life: Pope Francis. I tried for 20 years to get a pope to come and address a joint session of Congress. I never quit trying. And thank goodness, Pope Francis decided to come. Now, after he decided to come, I found out that my oldest daughter was pregnant with my first grandchild. And my grandchild was going to be born right before the pope came to the U.S., and so Cardinal Wuerl and some others were working the Vatican over to try to get the Pope to baptize my grandson. Well, you have to remember that the Vatican has a 2,000-year head start on bureaucracy over the U.S. To make a long story short, they said, “Well, listen, the Holy Father would be happy to baptize your grandchild but he really doesn’t want to do a baptism outside of a Church.” And so they get to the appointed day and my grandson was born on Aug. 11, and the pope came on Sept. 24, and my chief of staff and I, another Catholic guy, greeted the pope. Lights, cameras, and when we got rid of all that the pope and I went to sit down and I realized there were seven cardinals, the pope, my chief of staff and I, and I look at him and I say, “Why are WE here?” We had a very nice meeting, and as the meeting was breaking up, the pope was standing up, I was standing up, my family was in an adjoining room and they began to come in. The pope turned to his assistant and said, “Get me a glass of water.” Really? So I watched the assistant go get a glass of water and he brought it back to the pope, and the pope had it in his right hand and he put it in his left hand and I kept waiting for him to bless it, but he just took a drink. The greatest head fake in history!

But as our morning was ending, and after his address, the pope was getting ready to depart the Capitol. And we were standing in the first floor of the Capitol and I realized it was just the pope and me. And the pope took his left arm and grabbed my left arm and pulled me near him and started to say some of the nicest things anybody has ever said to me. And you can imagine by now, for those of you who don’t know, I probably got a few tears in my eyes. And then the pope took his right arm and put his arm around me and gave me this big bear hug and he looked at me, and he said, “Mr. Speaker, please pray for me.” And I said, “Your Holy Father, who am I to pray for you?” But I do, and I did.

But what did I learn from these people? I learned it wasn’t the job that they had — whether it was the pope, or Gerry Faust, or Lou Holtz — it was who they were as people that helped me decide who I was going to be and what I was going to be throughout my life. And through the power of the Holy Spirit that the pope brought that day, I was fortunate enough to wake up the next day and decide, “I’m out of here.” And if you want to know more about the Holy Spirit, just Google “Boehner, Holy Spirit” and you’ll get the rest of the story.

I’ll finish on this note: “Laetare” means rejoice. Trust me, every day since last October I have been rejoicing. God bless you, God bless this great institution, and good luck in your future.